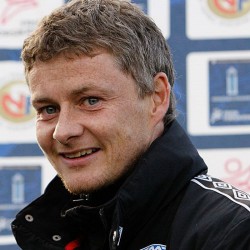 Ole Gunnar Solskjær KSO (born 26 February 1973) is a Norwegian professional football manager and former player. He is currently the manager of English club Manchester United. As a player, he played as a forward and spent most of his career with Manchester United. Solskjær also supervises a training academy for young footballers in his home town of Kristiansund, and is a patron of the Manchester United Supporters' Trust.

Before he arrived in England, Solskjær played for Norwegian clubs Clausenengen and Molde. He joined Manchester United in 1996 for a transfer fee of £1.5 million. Nicknamed "the Baby-faced Assassin", he played 366 times for United, and scored 126 goals during a successful period for the club. He was regarded as a "super sub" for his knack of coming off the substitute bench to score late goals. In injury time at the end of the 1999 UEFA Champions League Final, he scored the winning last-minute goal against Bayern Munich, with Manchester United having trailed 1–0 as the game passed 90 minutes, and winning The Treble for United. In 2007, Solskjær announced his retirement from football after failing to recover from a serious knee injury.

Solskjær remained at Manchester United in a coaching role as well as in an ambassadorial capacity. In 2008, Solskjær became the club's reserve team manager. He returned to his native country in 2011 to manage his former club, Molde, whom he led to their two first ever Tippeligaen titles in his first two seasons with the club. He secured a third title in as many seasons, when his team won the 2013 Norwegian Football Cup Final. In 2014, he served as manager of Cardiff City, during which the club were relegated from the Premier League. In late 2018, Manchester United appointed Solskjær as caretaker manager, taking over from José Mourinho for the rest of the 2018–19 season. On 28 March 2019, having won 14 of his 19 matches in charge, Solskjær signed a three-year contract to take over as Manchester United manager on a permanent basis.