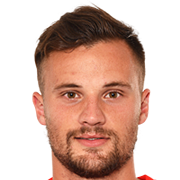 Haris Seferović (born 22 February 1992) is a Swiss footballer who plays for Portuguese club Benfica and the Switzerland national team as a striker.

Seferović made his professional debut at Grasshopper in April 2009; shortly after, in January 2010, he was signed by Italian side Fiorentina. However, much of his time at the latter club was spent out on loan, with a successful spell at Novara in Serie B, followed by a transfer to Real Sociedad of Spain in 2013. One year later, he joined German club Eintracht Frankfurt, with whom he spent three seasons before a transfer to Benfica in Portugal.

Early life
Seferović's family is from Sanski Most, Bosnia and Herzegovina (then in SFR Yugoslavia), who immigrated to Switzerland in the late 1980s. He is of Bosniak origin.

Club career
Early career
Seferović began his career in 1999 on FC Sursee's youth side and after five years signed in the summer of 2004 for Luzern. After three years in their youth teams, he was scouted by Grasshopper, and on 26 April 2009, he made his debut in the Swiss Super League against Neuchâtel Xamax. In January 2010, he was named as the Youth Player of the Year in the canton Lucerne.

Fiorentina
On 29 January 2010, Italian Serie A club Fiorentina signed Seferović from Grasshopper for a €2.1 million transfer fee. One day later, La Viola announced the deal was completed. The youngster was assigned to Fiorentina's primavera team. On 4 August 2011, Seferović was loaned to Swiss Super League side Neuchâtel Xamax.

On 27 January 2012, Seferović was loaned to Serie A club Lecce during the January transfer window. He spent the second half of the 2012–13 season with Novara of Serie B, scoring 10 goals in 18 matches, all as a starter. He scored a hat-trick in a 3–1 win over Livorno on 17 April as Novara eventually finished in the play-offs.

Real Sociedad
On 11 July 2013, Seferović completed a move to Spanish La Liga side Real Sociedad on a four-year deal for a €2 million transfer fee. He made his La Liga debut on 16 August 2013, and scored with a chip against Getafe, securing a 2–0 home victory. Four days later, he scored a volley as Real Sociedad beat Lyon 2–0 away from home in the play-off qualification round for the 2013–14 UEFA Champions League. He played in 24 league matches in his first season, only nine as a starter, and scored his only other league goal as a substitute for Carlos Vela, wrapping up a 5–0 win over Osasuna on 2 November. On 18 December, he scored Sociedad's third goal as the club defeated third-tier Algeciras 4–0 in the Copa del Rey's round of 32.

Eintracht Frankfurt
On 1 August 2014, Seferović completed a move to German Bundesliga club Eintracht Frankfurt, signing a three-year contract. The club said, "We intentionally chose a young player who already has a relatively high degree of experience, but who still has plenty of room for improvement." He made his debut on 16 August, scoring the opening goal in the ninth minute as Frankfurt defeated fourth-tier Viktoria Berlin 2–0 away in the first round of the DFB-Pokal. One week later, he made his first Bundesliga debut and scored the only goal from Frankfurt's first attack of the game to defeat SC Freiburg at the Waldstadion. In Frankfurt's 4–5 home defeat to VfB Stuttgart on 25 October, Seferović was sent off for a second yellow card.

In the 2015–16 Bundesliga, Seferović scored only three times in 29 games as Frankfurt came 16th and were confined to a play-off against 1. FC Nürnberg to maintain their spot in the top flight. After a 1–1 draw in the first leg at home, he scored the only goal in the second to maintain his club's place.

Seferović received a three-match ban in February 2017 for striking Hertha BSC's Niklas Stark during a 2–0 loss in Berlin. It was Frankfurt's sixth dismissal of the season and he was also fined an undisclosed amount which was donated to charity. He played four matches in the team's runner-up DFB-Pokal campaign, and scored the winning goal at Hannover 96 in the round of 16.

Benfica
On 2 June 2017, Seferović signed a five-year contract with Portuguese Primeira Liga champions Benfica. He made his debut for the Eagles on 5 August in the 2017 Supertaça Cândido de Oliveira at the Estádio Municipal de Aveiro, starting alongside Jonas scoring the second goal of a 3–1 win over Vitória SC. Four days later, he made his Primeira Liga bow in a home win by the same score over S.C. Braga, and scored the first goal from the Brazilian's assist. In October, he was praised by Benfica legend Nuno Gomes as a valuable player for the team. Seferović scored six times in all competitions in his first season with Benfica, all in the first half of the campaign, after which he lost his role of supporting Jonas to Raúl Jiménez.

Seferović (in white) guarding the ball against Austria's Christian Fuchs in a 2015 friendly
With the Swiss under-17 national team, Seferović won the 2009 FIFA U-17 World Cup in Nigeria and was the top scorer of the tournament. He scored five goals at the tournament, including the winning goal in the final against hosts Nigeria.

In 2013, ahead of the Bosnia and Herzegovina national team's match against Slovenia, Seferović claimed he wanted to play for the country of his parents' birth. However, he later accepted a call-up from Switzerland, and made his debut in a friendly against Greece on 6 February 2013, where he replaced Mario Gavranović for the last 20 minutes of the 0–0 away draw. On his third cap, on 8 June 2013, he replaced Josip Drmić for the last 15 minutes, and in injury time, scored the only goal of a home 2014 FIFA World Cup qualifier against Cyprus.

On 2 June 2014, Seferović was named in Switzerland's 2014 World Cup squad by head coach Ottmar Hitzfeld. In the team's first match, on 15 June in Brasília against Ecuador, he replaced Drmić for the last 15 minutes and scored the winner in the third minute of stoppage time.

In qualification for UEFA Euro 2016, Seferović scored three goals, including two in the first half of a 4–0 win away to San Marino that was Swiss' first victory of the campaign. Manager Vladimir Petković chose him in the 23-man squad for the finals in France.

Seferović added four more goals as the Swiss qualified for the 2018 FIFA World Cup, with two in a 3–0 win over Andorra in St. Gallen on 31 August 2017. Petković named him for the squad to compete in the finals in Russia.