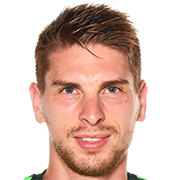 Ron-Robert Zieler (born 12 February 1989) is a German footballer who plays as a goalkeeper for German club VfB Stuttgart.

He began his professional career at Manchester United, where he did not play a competitive match, making his debut on loan at Northampton Town. In 2010 he moved to Hannover 96, where he made 221 professional appearances across six seasons; he did not miss a Bundesliga game in any of his five final seasons. Zieler joined Leicester City in 2016.

A former German youth international, Zieler won the 2008 UEFA European Under-19 Championship. He made his senior international debut in 2011, and was part of Germany's squads which reached the semi-finals of UEFA Euro 2012 and won the 2014 FIFA World Cup.

Zieler was born in Cologne, North Rhine-Westphalia. He began his football career with his hometown club SCB Viktoria Köln before joining 1. FC Köln in 2001. In July 2005, he moved to England as a trainee with Manchester United.

On 3 June 2016, Zieler returned to England, signing for champions Leicester City on a four-year deal for an undisclosed fee.

He was called up to the senior squad in August 2011, at first without making an appearance.

On 11 November 2011, 22-year-old Zieler played in the senior side 3–3 draw against Ukraine and was the 50th debutant of the Joachim Löw-era. He conceded all three goals within 17 minutes in the first half, without having saved a single shot until half time break, but observers found that all three goals were not his fault, and in the second half he showed a couple of brilliant saves to keep the score down. He is the first keeper since 1954 to concede as many as 3 goals (or more) in a debut match for Germany.

On 28 May 2012, Zieler was named the third goalkeeper of the German squad for the 2012 European Championship, remaining as back-up as they reached the semi-finals. On 15 August 2012, he started in net in a friendly match versus Argentina and was sent off, becoming the first German goalkeeper to earn a red card since the founding of the German national team. He was sent off after half an hour for conceding a penalty with a foul on José Sosa, but replacement Marc-André ter Stegen saved the penalty from Lionel Messi.