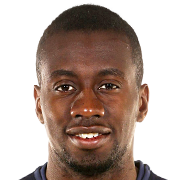 Blaise Matuidi (born 9 April 1987) is a French professional footballer who plays as a midfielder for Serie A club Juventus and the France national team. He is described as a "fierce and strong tackler".

Matuidi began his football career playing for amateur clubs in the Île-de-France region, such as US Fontenay-sous-Bois and CO Vincennois. In 1999, he was selected to attend the prestigious Clairefontaine academy. After departing Clairefontaine, Matuidi joined semi-professional club Créteil and spent three years developing in the club's youth academy. In 2004, he signed with professional club Troyes and made his professional debut in the 2004–05 season. After three seasons with Troyes, Matuidi joined Saint-Étienne. With Saint-Étienne, he played European football for the first time after participating in the 2008–09 edition of the UEFA Cup. In the 2009–10 season, he was named first-choice captain under manager Alain Perrin. In July 2011, after four seasons with Saint-Étienne, Matuidi transferred to Paris Saint-Germain on a three-year deal.

Matuidi is a former France youth international, having represented his nation at under-19 and under-21 level. In August 2010, Matuidi was called up to the senior team for the first time under new manager Laurent Blanc. He made his international debut in September 2010 in a UEFA Euro 2012 qualifying match against Bosnia and Herzegovina and has since represented his nation at two UEFA European Football Championships and two FIFA World Cups, winning a runners-up medal at Euro 2016, and a winner's medal at the 2018 FIFA World Cup.