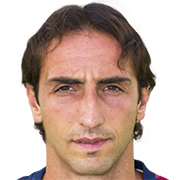 Emiliano Moretti (Italian pronunciation: ; born 11 June 1981) is an Italian former professional footballer who played as a centre back.

He began his career at Lodigiani and was signed by Fiorentina in 1998. In March 2001 he made his debut in Serie A under Roberto Mancini, before spending periods at Juventus, Modena, Parma and Bologna. In 2004, he was signed by Spaniards Valencia, where he won the Copa del Rey in 2007–08. In 2009, he returned to Italy where he spent four seasons with Genoa. In August 2013, he was signed by Torino, where he remained until his retirement in 2019, having collected over 600 career appearances at club level.

Internationally, Moretti represented Italy at under-16 and under-20 youth levels. He was also part of the under-21 team that won the UEFA European Under-21 Championship and a bronze medal at the 2004 Summer Olympics. On 18 November 2014, at the age of 33, he became the oldest player to debut for the Italy national football team, playing as a starter in a friendly against Albania. In total, he collected 2 appearances for Italy at senior level between 2014 and 2015.