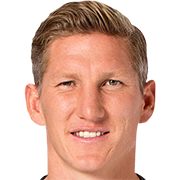 Bastian Schweinsteiger (born 1 August 1984) is a German retired professional footballer who usually played as central midfielder. Earlier in his career, he primarily played as a wide midfielder.

He spent 17 seasons at Bayern Munich, playing in exactly 500 matches across all competitions and scoring 68 goals. His honours at the club include eight Bundesliga titles, seven DFB-Pokal titles, a UEFA Champions League title, a FIFA Club World Cup title and a UEFA Super Cup title. He joined Manchester United in 2015, playing sparingly for 18 months before moving to Chicago Fire.

Schweinsteiger played for the German national team from 2004 to 2016. He is Germany's fourth most-capped player of all time, having earned 121 caps and scored 24 goals, in a 12-year international career starting in 2004. He was selected in their squads for four European Championships and three World Cups, including their victory at the 2014 FIFA World Cup. Following Philipp Lahm's international retirement on 2 September 2014, Schweinsteiger was named captain of the national team. He played his last match for Germany against Finland on 31 August 2016, after which he retired from international football.