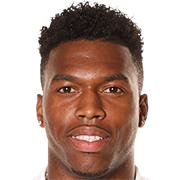 Daniel Andre Sturridge (born 1 September 1989) is an English professional footballer who last played as a striker for Turkish Süper Lig club Trabzonspor and the England national team. He has played in the Premier League for Manchester City, Chelsea, Bolton Wanderers, Liverpool and West Bromwich Albion.

Sturridge spent four years in the Aston Villa academy before moving to Coventry City. He then signed for Manchester City in 2003. He continued his development at City and played in two FA Youth Cup finals. He made his first-team debut in the 2007–08 season, becoming the only player ever to score in the FA Youth Cup, FA Cup and Premier League in the same season. He left City in 2009 and signed for Chelsea, where he was loaned out to Bolton Wanderers for the second half of the 2010–11 season. After a successful spell at Bolton, scoring eight goals in 12 appearances, he returned to Chelsea for the 2011–12 season.

He left Chelsea to join Liverpool in January 2013, where he formed an attacking partnership with Luis Suárez dubbed SAS, with Liverpool scoring more than 100 league goals in the 2013–14 season with Sturridge scoring 21 – the pair of them having a 1–2 in the goal scoring stats of the league. The following two seasons were curtailed by a myriad of injuries, limiting Sturridge to very few appearances. During those years, he scored the opening goal in the 2016 Europa League final, although Liverpool eventually lost the game to Sevilla. He featured most often as a substitute in the next seasons under manager Jürgen Klopp, but was part of the UEFA Champions League-winning squad in 2019.

Sturridge has represented England at all levels. He made 15 appearances and scored four goals for the under-21 team. He made his debut for England against Sweden on 15 November 2011 and was selected for the 2012 Summer Olympics, the 2014 FIFA World Cup and UEFA Euro 2016.