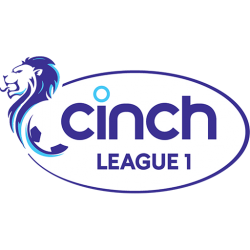 Format
Teams receive three points for a win and one point for a draw. No points are awarded for a loss. Teams are ranked by total points, then goal difference, and then goals scored. At the end of each season, the club with the most points is crowned league champion. If points are equal, the goal difference determines the winner. If this still does not result in a winner, the tied teams must take part in a playoff game at a neutral venue to determine the final placings.

The League One play-off system is consistent to its Championship counterpart, in which the bottom club of League One is automatically relegated and the 9th-placed club undergoes a play-off with the 2nd, 3rd and 4th placed clubs from League Two.