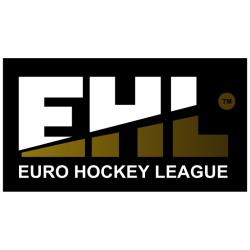 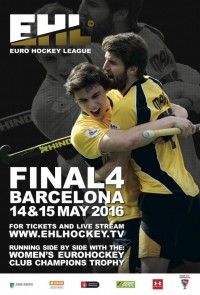 The Euro Hockey League is an annual men's field hockey cup competition organised by the EHF for the very top hockey clubs in Europe. The competition was launched at the start of the 2007-08 hockey season, when it merged and replaced the men's EuroHockey Club Champions Cup (the champions competition) and European Cup II (the Cup Winners' Cup). Featuring many of the world's best players, the EHL is now seen as the pinnacle of club hockey in Europe (hockey's equivalent of the UEFA Champions League) with top clubs from across the continent playing what many consider to be the most exciting and dynamic club hockey in the world. The success of the EHL formula has brought hockey to a significantly wider audience, as evidenced by the many millions of views that EHL clips on YouTube have received.

Format
The tournament features 24 clubs from the twelve highest ranked EHF member countries. Although the competition is called the Euro Hockey League, after round 1 the competition is knock-out, rather than league format (similar to the UEFA Champions League in football).

Each qualifying National Association is required to enter their national champion club, but is otherwise free to decide the system of qualification for their own clubs for any remaining places to which they are entitled that year.

To be eligible to play in the Euro Hockey League a country must enter 2 clubs in the EHF club competition.

The tournament starts with a group stage, or round 1, which has 12 teams: the 4 third placed teams from the associations ranked 1-4, the 4 second placed teams from the associations ranked 5-8 and the four champions of the associations ranked 9-12. Round 1 is usually played on the first or second weekend of October. There are 4 pools each of 3 clubs. Each club in a pool plays the other 2 clubs in that pool once. The following ranking point are applied in round 1: 5 points for a win, 2 points for a draw, 1 point for a loss with a goal difference of no more than 2 and 0 points for a loss with a goal difference of more than 2. The clubs who finished first in their pool advance into round 2 (KO16). The second and third ranked club in each pool are eliminated from that season's competition.

Round 2 (KO16) consists of 16 teams: the 4 champions and 4 second placed teams from the associations ranked 1-4, the 4 champions from the associations ranked 5-8 and the 4 winners of round 1. The champions from the associations ranked 1-8 are seeded for the draw. The 16 teams play in 8 knockout matches and the winners of those 8 matches play in round 3 (quarter finals). From the 2017-18 season onwards, the losers of the KO16 matches also play a second match (EHL ranking match) in the same weekend to determine which teams are ranked joint ninth and joint thirteenth and to earn points for their national association. Round 2 and 3 are played at the same venue at Easter. The winners of round 3 advance to round 4 (semi-finals) and round 5 (the final and 3/4 place), which are played at Whitsun. The EHL board can decide to combine the rounds 2/3 and 4/5.

Sponsorship
The much improved presentation and packaging of the Euro Hockey League has attracted a number of high-profile sponsors, most notably Dutch bank ABN-AMRO, who are the presenting sponsor of the tournament. Volvo and Intersport are also named sponsors of the Euro Hockey League, while partnerships have been formed with McGregor, ErmaSport, ATP - The Advanced Travel Partner and Dutch advertising agency Ideas for Brands.