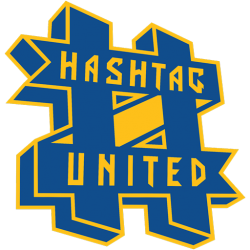 Hashtag United Football Club is a semi-professional football club based in Pitsea, Essex, England. They are currently members of the Essex Senior League and play at the Len Salmon Stadium.

Founded in 2016 by YouTube personality Spencer Owen, the club originally played exhibition matches against professional football clubs' staff teams, Sunday league teams and non-league teams. The games were filmed and highlights were uploaded to their YouTube channel, where they quickly gained a significant online following. In 2017 Owen began talks with the FA over the possibility of Hashtag joining the non-league pyramid. The club subsequently entered the league system at the beginning of the 2018–19 season, joining the Eastern Counties League.

After joining the Eastern Counties League, the club began playing at the Coles Park Stadium, groundsharing with Haringey Borough. In April 2019, following promotion to the Essex Senior League, Hashtag United announced that the club would move to Tilbury's Chadfields for the 2019–20 season. In March 2020 the club stated that they would move to the Len Salmon Stadium, home of Bowers & Pitsea, for the 2020–21 season. The women's team plays at Canvey Island's Park Lane ground.