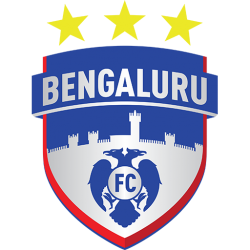 Bengaluru Football Club is an Indian professional football club based in Bengaluru, Karnataka. The club competes in one of the top leagues of Indian football, the Indian Super League under license from All India Football Federation (AIFF). The club was established on 20 July 2013, and began their first competitive season in the I-League a few months later on 22 September 2013. Since their foundation, the club has won two I-league titles, including one in their debut season, two Federation Cup titles, one Indian Super League title and a Super Cup championship. They are the current champions of the 2018–19 Indian Super League season defeating FC Goa in the final.

The club is owned and operated by the Mumbai–based JSW Group and its managing director Sajjan Jindal. Bengaluru have played every home match at the Sree Kanteerava Stadium since the beginning of the 2014–15 season. Despite only playing four seasons in the I-League, the club were considered one of the model clubs of Indian football. Bengaluru drew praise for bringing a new sense of professionalism to Indian football, including the use of on field equipment meant to help player fitness. The club is also known for their fan base, including the supporters group, West Block Blues, which has gained a reputation for being one of the most vocal and passionate fan bases in India.

Bengaluru played its inaugural match on 22 September 2013, earning a 1–1 draw against Mohun Bagan in the league. The club would go on to win the I-League in their debut season and then again two seasons later in 2015–16. As well as two league titles, Bengaluru also won two Federation Cups in 2015 and 2017. Between 2015 and 2018, the club also represented India in Asian club competition, competing in the AFC Cup for four consecutive years. During the 2016 AFC Cup, Bengaluru made it to the final where they lost 1–0 to Al-Quwa Al-Jawiya of Iraq.

From 2017–2018 season, Bengaluru FC joined Indian Super League and won their maiden title in 2018–19 season defeating FC Goa 1–0 in the final which was held on 17 March 2019. On September 28, 2019 Bengaluru FC announced partnership with the Scottish club Rangers.

It is Bengaluru's main sports stadium and several national level teams hold their training sessions here. The stadium was built on top of an old lake. The Sree Kanteerva athletic track was developed into a pro synthetic track for 1997 national games before which it was a cinder track.

The athletic track will soon be undergoing renovation. This original stadium was constructed through SVEC Constructions Ltd for Rs. 220 million and was completed by 31 May 1997.