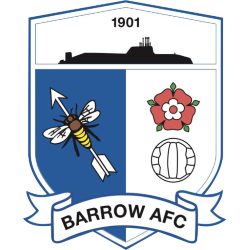 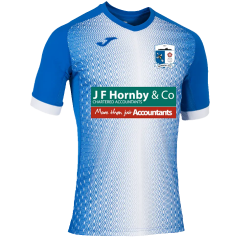 Barrow Association Football Club is an English professional association football club founded in 1901 and based in the town of Barrow-in-Furness, Cumbria. The club will participate in EFL League Two, the fourth tier of the English league system, in the 2020–21 season, having been promoted as champions from the National League in 2019–20. Since 1909, Barrow have played their home games at Holker Street (currently sponsored for the 2019–20 season as the "Progression Solicitors Stadium"), close to the town centre and approximately half a mile from Barrow Railway Station.

Barrow spent 51 years in the Football League between 1921 and 1972, achieving promotion to the Third Division by finishing third in the Fourth Division in the 1966–67 season. The club's highest-ever league placing was achieved in 1967–68 when the team finished eighth in the Third Division, but a decline quickly set in from this point and, at the end of the 1971–72 season, Barrow were voted out of the Football League in the re-election process. They subsequently spent 48 seasons in the top two levels of non-league football, with five relegations from and promotions to the Alliance Premier League (later the Football Conference and now the National League), of which they were a founder member in 1979. During this time they twice won non-league football's most prestigious cup competition, the FA Trophy, in 1990 and 2010, becoming the only club to win the tournament at both the old and new Wembley Stadiums.

The club colours are blue and white, though the combination of these has varied over time, leading to their nickname "The Bluebirds". The record attendance at Holker Street is 16,874 set against Swansea Town in the 1954 FA Cup third round.

Holker Street, also known as the Progression Solicitors Stadium for sponsorship purposes, is a sports stadium located in Barrow-in-Furness, Cumbria, England. Currently and originally used as a football ground, it has also previously been used for speedways races. In addition, the ground also previously had some leisure centre facilities, including four squash courts which have now been demolished. Its current owners and tenants for the vast majority of its history are Barrow A.F.C., who have played at the ground since 1909. Despite having a present capacity of just over 5,000, some 16,874 people crammed the stadium in January 1954 when Barrow played Swansea Town in the FA Cup third round.