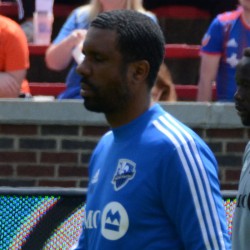 Wilfried Nancy (born 9 April 1977) is a French football manager who is the current manager of the Major League Soccer club CF Montréal. He was formerly a professional footballer, and played as a defender.

Career
Nancy was a professional footballer in France, and began his career with Toulon. He also had stints at various amateur and semi-professional clubs, including Beaucairois, Raon-l'Étape, Ivry, Noisy-le-Sec, Châtellerault, and Orléans before moving to Canada in 2005 with the UQAM team.

Managerial career
After retiring as a footballer, Nancy coached AAA soccer from 2006 to 2007. He coached Quebec's provincial teams from 2007, and was also assistant technical director of the Association régionale de soccer de la Rive-Sud in 2008.

He was part of the Montreal Impact Academy since its inception in 2011 starting with the U18s, then the U21s in 2014, followed by the U16s from 2014 to 2015. He was promoted to assistant coach for the first team on 7 January 2016. On 8 March 2021, following Thierry Henry's resignation, Nancy was promoted to head coach for CF Montréal becoming the club's first coach following their re-branding from the Impact name.