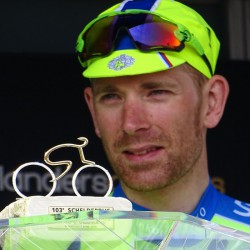 Career
Born in Kokkedal, Mørkøv started as a track cyclist, becoming national champion in the points race in 2004. In the 2008 Olympic games, he won the silver medal in the team pursuit.

As a road cyclist, Mørkøv became national time trial champion in 2005. Mørkøv rode the 2010 and 2011 Giro d'Italia, finishing both. Mørkøv rode his first Tour de France in 2012, drawing attention by featuring in the most important escapes of the first three stages, where he gained enough points to lead the mountains classification. He held polka-dot jersey until stage 7, where stage winner Chris Froome took it.

In August 2015 it was announced that Mørkøv would join Team Katusha for the 2016 season, at the request of Alexander Kristoff, with a view to working for Kristoff as part of his sprint train and as a domestique in the classics.