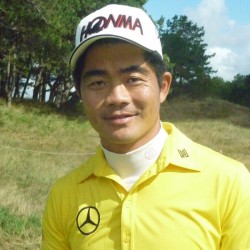 Liang Wenchong (simplified Chinese: 梁文冲; traditional Chinese: 梁文沖; pinyin: Liáng Wénchōng, born 2 August 1978) is a Chinese professional golfer. He was the highest ranked golfer from the People's Republic of China and the first Chinese golfer to have reached the top 100 of the Official World Golf Ranking. He succeeded his mentor Zhang Lian-wei as the top Chinese player.

In August 2007 he became the first golfer from the People's Republic of China to play in the PGA Championship. He ended up missing the cut. He also received a special invitation to play in the 2008 Masters Tournament. In July 2008, Liang became the first Chinese golfer to make the cut at a major, The Open Championship at the Royal Birkdale Golf Club. In August 2010, Liang set a new course record at Whistling Straits with his 8-under 64 in the third round of the 2010 PGA Championship, where he finished eighth.