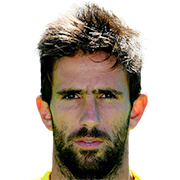 Nuno Miguel Prata Coelho (born 23 November 1987) is a Portuguese professional footballer who plays for F.C. Arouca as a midfielder.

Club career
Born in Covilhã, Coelho moved from hometown's S.C. Covilhã to F.C. Porto in 2005 to complete his formation although he had already appeared for the former's first team, and went on to serve three loans in the following three seasons, including two 1/2 at second division club Portimonense SC, where he played alongside namesake Nuno André Coelho.

In July 2009 Coelho was again loaned by Porto, moving to Villarreal CF in Spain. However, the deal eventually broke and he stayed in Portugal, penning a two-year contract with Académica de Coimbra.

On 9 June 2011, after being regularly used in two top flight seasons by the Students, Coelho signed a four-year deal with S.L. Benfica. In August, deemed surplus to requirements as practically all Portuguese players by manager Jorge Jesus, he was loaned to S.C. Beira-Mar.