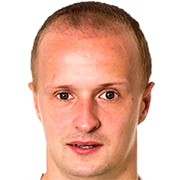 Leigh Griffiths (born 20 August 1990) is a Scottish professional footballer who plays as a striker for Scottish Premiership club Dundee, on loan from Celtic, and the Scotland national team.

Griffiths started his career at Livingston where he made his debut as a sixteen-year-old. He then moved to Dundee in 2009 for £125,000. During his five years in the Scottish First Division he earned six player of the month awards. With Dundee in financial trouble, Griffiths moved to Wolves for around £150,000 in January 2011.

Having not been a Wolves first team regular, he spent the 2011–12 season on loan to Scottish Premier League club Hibernian. This loan was renewed for the following season, during which he won the SFWA Footballer of the Year award and made his debut appearance for Scotland. After it appeared Griffiths had become part of Wolves' plans during the 2013–14 season he moved mid-season to join Celtic.

Early and personal life
Griffiths was born in Leith, Edinburgh. Between 2011 and 2013, he fathered four children.

Club career
Livingston
Griffiths made his debut for Livingston as a sixteen-year-old, after coming on as an 82nd minute substitute during a 3–1 defeat to Airdrie United on 30 December 2006. He went on trial at Premier League team West Bromwich Albion in April 2009 and impressed enough to warrant a move. However, Tony Mowbray's departure as manager saw Griffiths' chance of a move ended.

Dundee
On 25 June 2009, Griffiths completed a £125,000 move to Scottish First Division rivals Dundee, despite having an offer rejected for the player back in April. He later revealed that he had rejected contract talks with Hearts, citing his belief he would benefit from more first team football at Dundee and Hearts' then defensive playing style as the reasons. He scored three goals on Dundee's run in the 2009–10 Scottish Challenge Cup, and played in their 3–2 win over Inverness in the final. Livingston claimed in January 2011 that they had yet to receive payment, which was denied by Dundee. Griffiths became a fans favourite during his spell at Dundee and scored 34 goals in 62 appearances, which included a memorable 30-yard free kick in the Scottish League Cup against Rangers.

Wolverhampton Wanderers
On 27 January 2011, Griffiths signed for English Premier League side Wolverhampton Wanderers on a two-and-a-half-year contract for an undisclosed fee (believed to be £150,000), after he successfully completed a two-week trial. He was an unused substitute against Tottenham in March 2011, but did not feature again in part of any matchday squads during the club's remaining fixtures that season. His Wolves debut came on 23 August 2011, when he came on as a substitute in a League Cup tie at Northampton Town, in what was to be his only game for the club during the 2011–12 and 2012–13 seasons.

In both these seasons, Wolves instead loaned him out to Hibernian, where he enjoyed considerable success (see below). Following his performances with Hibs, Wolves opted to take up their option of a contract extension that would ensure Griffiths remained under contract for the 2013–14 season. Hibernian subsequently made an offer to acquire him in a permanent deal, but it was rejected by Wolves, who also stated that they had "no intention of selling the player on to any other club". New Wolves manager Kenny Jackett affirmed that Griffiths was part of his plans for their campaign in League One, and he made his league debut for the club on 3 August 2013 against Preston, some two-and-a-half years since first signing. He scored his first goals for the club a week later when he scored twice against Gillingham, having agreed a new long-term contract.

By January 2014 Griffiths was Wolves' leading goalscorer for the season with thirteen goals, attracting bids from Celtic. After Wolves rejected initial offers from the Scottish champions, they accepted a bid on 31 January, reported to be £1 million.

Hibernian (loan)
Griffiths moved on a 6-month loan in August 2011 to Scottish Premier League club Hibernian. Three days before his loan was due to end, it was extended to the end of the season. He was criticised by the Hibs manager, Pat Fenlon, after he was suspended for a second time for gesturing at supporters. Later that month, he was suspended again for the same offence. In March 2012, newspaper reports claimed that he had assaulted Fenlon and his assistant, but these reports were denied by the club. He scored a late winning goal in the 2–1 win in the Scottish Cup semi-final against Aberdeen. Overall, Griffiths scored 11 goals in 36 appearances for Hibs during the 2011–12 season.

Hibs agreed another loan deal with Wolves for Griffiths in July 2012, due to run until at least January 2013. He scored three goals early in the 2012–13 season, including two in one match against St Mirren. He won the SPL Player of the Month award for August 2012, then scored both goals in a 2–1 win against Kilmarnock in his next appearance. Two goals in another match against St Mirren on 3 November increased his tally to eleven for the season. This run of form earned him a first Scotland cap, in a friendly against Luxembourg. His form dipped after this, however, as he scored two goals in the next thirteen matches.

In January 2013, Griffiths trained with his parent club Wolves to allow new manager Dean Saunders to assess him. Wolves then issued a statement criticising him for making an offensive comment on Twitter. PFA Scotland said that although they could not comment about individual cases that were ongoing, they condemned all "discriminatory behaviour" and urged their members to be aware of the dangers of misusing social media. Campaign group Show Racism the Red Card said that they were "saddened" by the comments and acknowledged the apology made by him to the individual affected and the general public.

In their statement about Griffiths, Wolves said that he was likely to remain at Hibs for the rest of the season. It was confirmed on 16 January that he would remain at the Easter Road club for the remainder of the 2012–13 campaign. He scored in every SPL match during February to win a second SPL player of the month award. On 3 March 2013, he scored his first ever professional hat-trick in a Scottish Cup tie against Kilmarnock. A week later during an Edinburgh derby, he appeared to have scored a free-kick goal after the ball rebounded off the crossbar and dropped behind the goal-line, before bouncing back into play. Television replays showed that the ball had crossed the line by a few feet, but referee Euan Norris did not give a goal and the match finished 0–0. In the Scottish Cup semi-final on 13 April 2013, he scored in extra time to seal a come-from-behind 4–3 victory over Falkirk.

On 17 May, he was named the SFWA Footballer of the Year, becoming the first Hibs player to win that award since Pat Stanton in 1970.