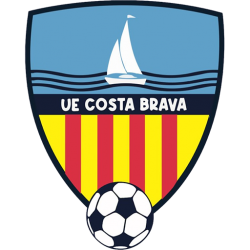 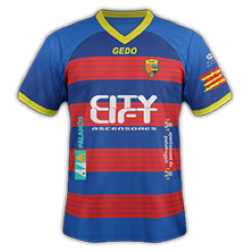 Unió Esportiva Llagostera is a Spanish football team based in Llagostera, Girona, in the autonomous community of Catalonia. Founded in 1947, it plays in Segunda División. Its home stadium was Estadi Municipal de Llagostera, with a capacity for 1,500 spectators, but as that does not meet LFP criteria for home games, the team will play as home team for the next 5 seasons in the Estadi Palamós Costa Brava, 30 km from Llagostera, which holds 3,724 spectators. Llagostera is the smallest town ever to have a team in one of the two professional football divisions in Spain.

The Estadi Municipal Palamós Costa Brava is a multi-use stadium located in Palamós, Catalonia, Spain. It is currently used for football matches and is the home stadium of Palamós CF and UE Llagostera.

Palamós Costa Brava was inaugurated on 29 August 1989 under the name of Nou Estadi Municipal de Palamós, being the new home stadium of Palamós CF and replacing Camp de Cervantes. Its first match was a 2–1 friendly win against neighbours FC Barcelona on the same day.

The stadium's first competitive match took charge on 10 September, a 1–1 draw against Levante UD for the Segunda División championship. This was the club's most successful period, as it remained in the second level for six consecutive campaigns.

On 7 July 2014 the stadium was named as the new home ground of UE Llagostera for the following five seasons, as the club's stadium, Estadi Municipal de Llagostera, didn't meet the LFP criteria. On 2 August, it was renamed to Estadi Municipal Palamós Costa Brava.

In the 2015 summer, the stadium was renovated by adding seats in all the stands, and had its capacity reduced to 3,724 spectators.