The San Jose Earthquakes are an American professional soccer team based in San Jose, California, United States, that competes as a member of the Western Conference of Major League Soccer (MLS). The franchise began play in 1996, (originally as the San Jose Clash), as one of the charter clubs of the league. The Earthquakes took part in the first game in MLS history, defeating D.C. United 1–0. The Earthquakes have won two MLS Cup titles, in 2001 and 2003, and two Supporters' Shields in 2005 and 2012. In 2002, the team played in its first CONCACAF Champions Cup (now called the CONCACAF Champions League), making it to the quarterfinals. The team holds a fierce rivalry with the LA Galaxy known as the California Clásico.

In 2005, the then owner of the Earthquakes, Anschutz Entertainment Group, announced plans of the team relocating to Houston due to failing efforts to secure a soccer-specific stadium in San Jose. The organization in Houston would be considered an expansion team by the league, eventually becoming the Houston Dynamo, who began play in 2006. The Earthquakes returned after a two-year hiatus, resuming play in 2008. Steve Ralston currently serves as interim head coach. The Earthquakes play their home games at Avaya Stadium beginning in 2015. The team previously played its home games at Buck Shaw Stadium on the Santa Clara University campus in Santa Clara, California from 2008 to 2014.

In 2018, the club added the dubious MLS Wooden Spoon to its trophy case for ending up bottom of the MLS league table, finishing the season with 21 points in 34 games. Avaya Stadium is a soccer stadium in San Jose, California, United States, and is the home of Major League Soccer's San Jose Earthquakes. The stadium is located on the Airport West site that is located to the west of San Jose International Airport.

Avaya Stadium officially opened for business on February 27, 2015, and has a capacity of approximately 18,000. It is sponsored by Avaya, headquartered nearby in Santa Clara. The stadium features a canopy roof and the steepest-raked seating in Major League Soccer to provide a better view. Additionally, the area behind the northeast goal houses the largest outdoor bar in North America, a two-acre fan zone and a double-sided video scoreboard. The suites and club seats are located at field level. The stadium is part of a mixed-use residential, retail, R&D, and hotel development.

The stadium was constructed privately with no public money provided by the city of San Jose. Additionally, Lewis Wolff, owner of the San Jose Earthquakes, offered to pay for the maintenance of the stadium for a 55-year time span. The team organization initially delayed the completion date to the middle of the 2014 MLS season, but later delayed it again to the 2015 season. The seat pattern includes three different shades of blue as well as a smattering of red seats to pay homage to the club's NASL history. Additionally, the pattern contains the message "Go EQ" written in binary. 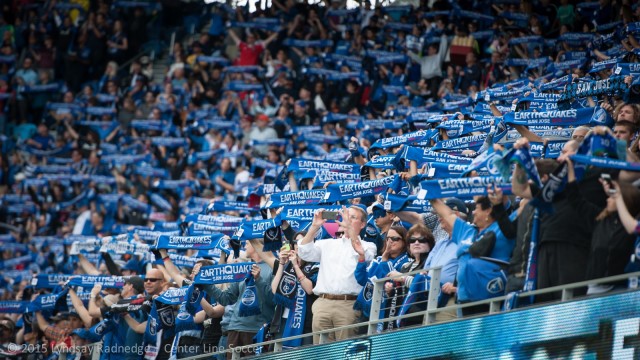