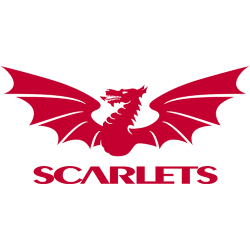 The Scarlets (Welsh: Y Scarlets) are one of the four professional Welsh rugby union teams and are based in Llanelli, Wales. Their home ground is the Parc y Scarlets stadium. They play in the Pro14 and the European Rugby Champions Cup (which replaced the Heineken Cup from the 2014–15 season). The club was originally named the Llanelli Scarlets but was renamed at the start of the 2008–09 rugby season.

The Llanelli Scarlets were founded in 2003, as one of the five (now four) regional teams created by the Welsh Rugby Union (WRU). The Scarlets are affiliated with a number of semi-professional and amateur clubs throughout the area, including Welsh Premier Division sides Llanelli RFC, Carmarthen Quins RFC and Llandovery RFC. Through the 2007–08 season, they played most of their games at Stradey Park in Llanelli, but they have also played matches at the Racecourse Ground in Wrexham. The club's new stadium, Parc y Scarlets (English: Scarlets Park), was constructed in nearby Pemberton, and opened in November 2008.

Parc y Scarlets, English: Scarlets Park) is a rugby union stadium in Llanelli, Carmarthenshire, that opened in November 2008 as the new home of the Scarlets and Llanelli RFC. The ground replaced Stradey Park, the home of Llanelli's rugby teams for almost 130 years. The stadium complex includes facilities for matchday supporters and for non-matchday revenue generation, as well as a training barn and a training pitch with athletics track. The stadium also occasionally hosts some matches of the Wales national under-21 and senior football teams, as well as Llanelli A.F.C.'s matches in European competitions. Swansea City A.F.C. Reserve Team played all of their home fixtures at the stadium in the 2011/2012 season.