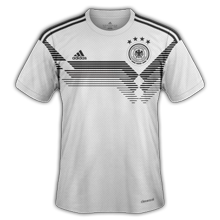 The Germany national football team (German: deutsche Fußballnationalmannschaft or Die Mannschaft) is the men's football team that has represented Germany in international competition since 1908. It is governed by the German Football Association (Deutscher Fußball-Bund), founded in 1900. Ever since the DFB was reinaugurated in 1949 the team has represented the Federal Republic of Germany. Under Allied occupation and division, two other separate national teams were also recognised by FIFA: the Saarland team representing the Saarland (1950–1956) and the East German team representing the German Democratic Republic (1952–1990). Both have been absorbed along with their records by the current national team. The official name and code "Germany FR (FRG)" was shortened to "Germany (GER)" following the reunification in 1990.

Germany is one of the most successful national teams in international competitions, having won four World Cups (1954, 1974, 1990, 2014), three European Championships (1972, 1980, 1996), and one Confederations Cup (2017). They have also been runners-up three times in the European Championships, four times in the World Cup, and a further four third-place finishes at World Cups. East Germany won Olympic Gold in 1976.

Germany is the only nation to have won both the men's and women's World Cups. After winning the 2017 Confederations Cup, it became one of the only four nations—alongside Brazil, Argentina and France—to win all three most important men's titles recognised by FIFA: the World Cup, the Confederations Cup, and the Olympic tournament. They have also won their respective continental championship (Copa América for Argentina and Brazil, and UEFA European Championship for France and Germany).

At the end of the 2014 World Cup, Germany earned the highest Elo rating of any national football team in history, with a record 2205 points. Germany is also the only European nation that has won a FIFA World Cup in the Americas. The manager of the national team is Joachim Löw.

Olympiastadion (German pronunciation: ) is a sports stadium in Berlin, Germany. It was originally built by Werner March for the 1936 Summer Olympics. During the Olympics, the record attendance was thought to be over 100,000. Today the stadium is part of the Olympiapark Berlin.

Since renovations in 2004, the Olympiastadion has a permanent capacity of 74,475 seats and is the largest stadium in Germany for international football matches. Olympiastadion is a UEFA category four stadium and one of the world's most prestigious venues for sporting and entertainment events.

Besides its use as an athletics stadium, the arena has built a footballing tradition. Since 1963, it has been the home ground of the Hertha BSC football team. It hosted three matches in the 1974 FIFA World Cup. It was renovated for the 2006 FIFA World Cup, when it hosted six matches, including the final. The German Cup (DFB-Pokal) final match is held each year at the venue. The Olympiastadion Berlin served as a host for the 2011 FIFA Women's World Cup as well as the 2015 UEFA Champions League Final.