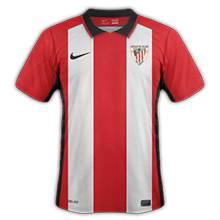 Bilbao Athletic, officially named Athletic Club "B", is the reserve team of Athletic Bilbao, a football club based in Bilbao, in the autonomous community of Basque Country. The team will play in the Segunda División B in the 2019–20 season. Founded in 1964, the team holds home matches at the small stadium attached to the club's training facility at Lezama, holding 3,250 spectators or occasionally at San Mamés Stadium, with its 53,500-seat capacity, for important fixtures.

Reserve teams in Spain play in the same football pyramid as their senior team rather than a separate league. However, reserves cannot play in the same division as their senior team. Therefore, Bilbao Athletic are ineligible for promotion to La Liga. Reserve teams are also no longer permitted to enter the Copa del Rey. In addition, only under-23 players, or under-25 with a professional contract, can switch between senior and reserve teams. In recent years, most of Bilbao Athletic's players have been graduates from the club's youth setup ('cantera') via the farm team, Basconia.