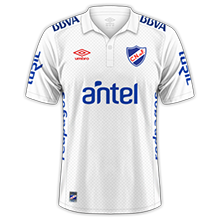 Club Nacional de Football is a sports institution from Uruguay, founded on 14 May 1899 in Montevideo, as a result of the fusion between Uruguay Athletic Club and Montevideo Fútbol Club. Although its main focus is football, the club hosts many other activities including basketball, futsal, tennis, cycling, volleyball and chess.

At international level, Nacional has won 21 titles, nine of them recognised by FIFA and CONMEBOL that include three Copa Libertadores. In this tournament, Nacional is the all-time leader with 553 points. Nacional also won three Copa Intercontinental, becoming the first unbeaten three times world champion. In addition, Nacional is the only Uruguayan team that won the Copa Interamericana (two times) and the Recopa Sudamericana, competition in which is the first champion (1989). Besides, Nacional won four Copa de Honor Cousenier, three Copa Aldao two Tie Cup, and one Copa Escobar-Gerona, all of them organized by Argentine and Uruguayan Associations together.

Nacional is identified with the white, blue and red colours inspired by the flag of Uruguay's national hero José Gervasio Artigas. In spite of hosting some games at the Montevideo's city property Estadio Centenario, Nacional plays most of its home matches at the Parque Central, located in the La Blanqueada neighbourhood and popularly known as El Parque, where on 13 July 1930 Belgium and the United States played one of the two opening games of the 1930 FIFA World Cup, and where Argentina and Brazil, among others, made their debut in FIFA World Cup. Besides, Parque Central was the only venue in the 1923 and 1924 edition of the Copa América.

The Estadio Gran Parque Central, usually just Parque Central, is the stadium of Club Nacional de Football. It is located in Montevideo, Uruguay, near Nacional headquarters (exactly between the streets Carlos Anaya, Jaime Cibils, General Urquiza and Comandante Braga), in the La Blanqueada neighbourhood. In this stadium, Nacional plays most of its home games.

This stadium was one of the venues of the 1930 FIFA World Cup, and it is the ground in which one of the first matches in the history of the FIFA World Cup were played (when in group D the United States defeated Belgium 3–0 on July 13, 1930). This historical fact was remembered by FIFA on two occasions: 1987 and 2005. At the same time, another match was played at the now defunct Estadio Pocitos, between France and Mexico, where the first ever goal on a world cup was scored. The stadium has four main stands: Tribuna José María Delgado (North), Tribuna Atilio García (South), Tribuna Abdón Porte (West), Tribuna Héctor Scarone (East), named after famous Nacional players (like Atilio García, Abdón Porte and Héctor Scarone) and a chairman of the club (José María Delgado).