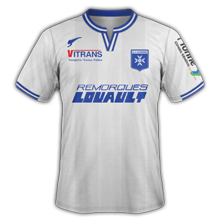 Association de la Jeunesse Auxerroise (commonly known as AJ Auxerre or simply Auxerre) is a French football club based in the commune of Auxerre in Burgundy. The club was founded in 1905 and currently play in Ligue 2, the second division of French football. Auxerre plays its home matches at the Stade l'Abbé-Deschamps on the banks of the Yonne River. The team is managed by former football player Jean-Luc Vannuchi and captained by goalkeeper Olivier Sorin.

Auxerre was founded in 1905 and made its debut in the first division of French football in the 1980–81 season and have remained a fixture in the league until 2011–12 season. The club has won the Ligue 1 title once, in the 1995–96 season. Two years prior, Auxerre achieved its first major honour by winning the Coupe de France in 1994. The club has since added three more Coupe de France titles, which ties the club for fifth-best among teams who have won the trophy.

Auxerre have unearthed several talented players in its existence. The club has most notably served as a springboard for several prominent French football players such as Eric Cantona, Laurent Blanc, Philippe Mexès, Basile Boli, and Djibril Cissé, among others. All six players became French internationals with Blanc playing on the teams that won the 1998 FIFA World Cup and UEFA Euro 2000. From 1961 to 2005 the club was predominantly coached by Guy Roux. This included an uninterrupted period when Roux was in charge for 36 years between 1964 and 2000.