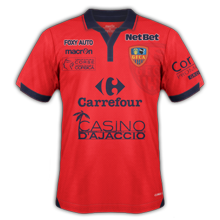 Gazélec Football Club Ajaccio, sometimes called GFC Ajaccio, is a French football club from Ajaccio, Corsica. Founded in 1910, Gazélec play in Ligue 1, the top tier of football in France.
They are best known for reaching the semi-finals of the 2011-12 Coupe de France, in which they hosted later home games at the larger Stade François Coty, home of AC Ajaccio. On 15 May 2015, Gazélec were promoted to Ligue 1 for the first time in the club's history, following a 3–2 win over Niort with two goals by John Tshibumbu. It was their second consecutive promotion and fourth in five years. Their Stade Ange Casanova will double in size to hold 5,000 in Ligue 1.
GFCO Ajaccio were relegated to the Championnat National at the end of the 2018/2019 season.

Stade Ange Casanova is a football stadium in Ajaccio, Corsica, France and is the home stadium of Gazélec Football Club Olympique Ajaccio. Its current capacity is 6,000 people.

Stade Mezzavia was built in 1961. It was renamed Stade Ange Casanova on 16 July 1994 in memory of Ange Casanova, ex-director of Gazélec. Before 1961, the club played at the Stade Miniconi.