Hajduk was founded by a group of Split students in a famous tavern known as U Fleků in Prague. Between the early 1920s and 1940, Hajduk regularly participated in the Kingdom of Yugoslavia national championship. Following World War II and the formation of the Yugoslav league system in 1946, Hajduk went on to spend the entire SFR Yugoslavia period at the top level. The club's run continued following the breakup of Yugoslavia, as the club joined the Croatian First League in its inaugural season in 1992, never having been relegated from its top tier. They are one of the most successful teams in Croatia and ex-Yugoslavia, having won nine Yugoslav and six Croatian league championships, in addition to nine Yugoslav and five Croatian cup titles and five Croatian supercup titles, without ever being relegated from its countries top football league.

The club's "golden era" came in the 1970s, when they won four Yugoslav leagues and five Yugoslav cups. Hajduk is also the only club in Yugoslav football history that has won five-straight Yugoslav cups (between 1972 and 1977), and also the only unbeaten champion (season 1950). Hajduk's biggest European achievements are appearances in three European Cup quarter-finals, one UEFA Cup semi-final and one Cup Winners' Cup semi-final.

The club's main rivals are Dinamo Zagreb, with matches between the two referred to as the Eternal Derby. Hajduk Split fans are called Torcida Split, who are the oldest organized firm in Europe, being founded in 1950. The inspiration of the name were the Brazilian fans at the 1950 FIFA World Cup which were called Torcida. Hajduk is the second most popular club in Croatia with more than one million supporters or 24% of population. Traditionally club has the biggest support in Dalmatia where 76% of people support Hajduk.

As of 2008, the club is a stock company, although not listed on the public stock exchange, with majority of the stock owned by the City of Split. It is one of two fan-owned sports teams in Croatia, reaching over 43,000 members in 2016, and over 31,000 members for current year. There are also over 50 Hajduk fan clubs situated mostly across Croatia and Germany, but as far as United States, Ireland and Australia.

Stadion Poljud is a multi-use stadium in the Croatian city of Split. It takes its name from the neighbourhood of Poljud, and is located on the northern side of the Split peninsula. Its original name is "Gradski stadion u Poljudu" ("City Stadium in Poljud"). The stadium was opened in September 1979 and is the home venue of the Hajduk Split football club. The stadium has a capacity of 34,198.

The venue was built to host the 1979 Mediterranean Games and was opened by the then Yugoslav president, Josip Broz Tito. It had an original capacity of 55,000, increased to 62,000 in the 1980s, before being equipped with seats in the 1990s thus reducing the capacity to 35,000.

Poljud Stadium was also the venue for the 1990 European Athletics Championships and the 2010 IAAF Continental Cup, and from 2013 to 2018, it was annually hosted Ultra Europe. 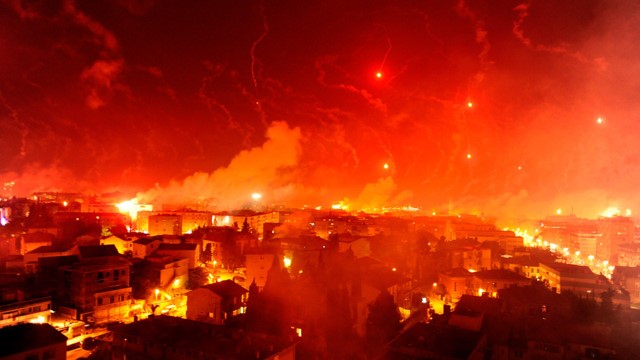