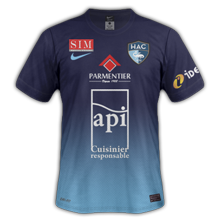 Havre Athletic Club (commonly referred as Le Havre or simply as Havre) is a French association football club based in Le Havre, Haute-Normandie. The club was founded originally as an athletics and rugby club in 1872, thus making it the oldest association football and rugby club registered in France. Le Havre currently plays in Ligue 2, the second level of French football and since 2012 plays its home matches at the Stade Océane.

Le Havre made its football debut in France's first-ever championship in 1899 and, on its debut, became the first French club outside of Paris to win the league. The club, subsequently, won the league the following season in 1900. Le Havre has yet to win the current first division of French football, Ligue 1, but has participated in the league 24 times; its last stint being during the 2008–09 season. The club's highest honour to date was winning the Coupe de France in 1959. Le Havre is managed by Thierry Goudet and captained by midfielder Julien François.

The Stade Océane (or Grand Stade du Havre) is a football stadium in Le Havre, France. Its capacity is 25,178 all-seated and it is the home ground of Le Havre AC. It replaces the Stade Jules Deschaseaux as the club's home stadium. Its inauguration was 12 July 2012, with a friendly fixture between Le Havre AC and Lille. A similar stadium is being built now in Haifa by KSS Architects.