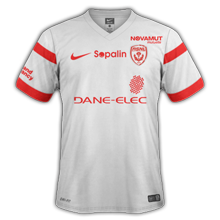 Association Sportive Nancy-Lorraine (commonly known as AS Nancy-Lorraine, AS Nancy, ASNL, or simply Nancy) is a French association football club based in Nancy, Lorraine. The club was founded in 1967 and currently play in Ligue 2, the second level of French football. Nancy plays its home matches at the Stade Marcel Picot in Tomblaine, a commune located in the Arrondissement of Nancy.

Nancy was founded as the successor to FC Nancy, which collapsed in 1965. The club has spent its entire life playing in either Ligue 1 or Ligue 2. Nancy has never won the first division, but has won the second division on four occasions. Nancy's biggest achievement came in 1978 when the club won the Coupe de France defeating Nice in the final. The club has also won the Coupe de la Ligue in 2006. Nancy is presided over by Jacques Rousselot. Rousselot serves as a vice-president of the French Football Federation and is also a member of the federation's Federal Council.

One of the club's most notable players is Michel Platini, the current UEFA's president. Platini began his career at the club in 1972 and playing eight seasons with Nancy. He scored the only goal in the aforementioned Coupe de France final and won two French Player of the Year awards in while playing with the club. Platini also established himself as a French international while at the club and went on to achieved numerous team and individual accolades after his departure from Nancy. He is considered to be, arguably, the club's greatest player ever and, upon entering the section of the club's official website which shows Nancy's greatest players, a picture of a young Platini is displayed. Stade Marcel Picot is a football (soccer) stadium located in Tomblaine, France, near the city of Nancy. Built in 1926, it is used by Ligue 1 soccer team AS Nancy.

The stadium was completely rebuilt and inaugurated in its new configuration in 2003. It is now able to hold 20,087 people.

Since summer 2010, Marcel-Picot is one of the very few French stadiums equipped with artificial turf.