Clermont Foot vs Sochaux (08 May) 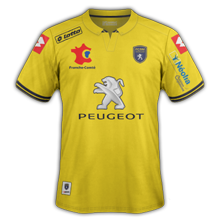 Football Club Sochaux-Montbéliard (commonly referred to as FCSM or simply Sochaux) is a French association football club based in the city of Montbéliard. The club was founded in 1928 and currently plays in Ligue 2, the second tier of French football, after having finished 18th and being relegated from Ligue 1 in the 2013–14 season. Sochaux plays its home matches at the Stade Auguste Bonal located within the city.

Sochaux was founded by Jean-Pierre Peugeot, a prominent member of the Peugeot family, and is one of the founding members of the first division of French football. Sochaux was one of five clubs to have played in the inaugural 1932–33 season and still be playing in the first division, along with Marseille, Montpelllier, Rennes, and Nice until the end of the 2013-14 Ligue 1 season. The club has won both Ligue 1 and the Coupe de France twice and have also won the Coupe de la Ligue. Sochaux's last honour came in 2007 when the club, under the guidance of Alain Perrin, defeated favourites Marseille 5–4 on penalties in the 2007 Coupe de France Final. Sochaux's colours are gold and navy blue.

Sochaux is known for its youth academy, which has regularly finished in the top 10 rankings of youth academies in France (4th in 2010). The most successful team in the academy is the under-19 team, which has won the Coupe Gambardella twice; in 1973 and 2007. In 2010, Sochaux finished runners-up to FC Metz in the 2010 edition of the competition. The academy has produced several notable talents, such as Yannick Stopyra, El-Hadji Diouf, Jérémy Ménez, Bernard Genghini, and Benoît Pedretti, among others.

Stade Auguste Bonal is a multi-purpose stadium in Montbéliard, France. It is used mostly for football matches. It is the home ground of FC Sochaux-Montbéliard. The stadium is able to hold 20,025 people. Constructed in 1931, it has undergone several renovations, most recently in 2000.