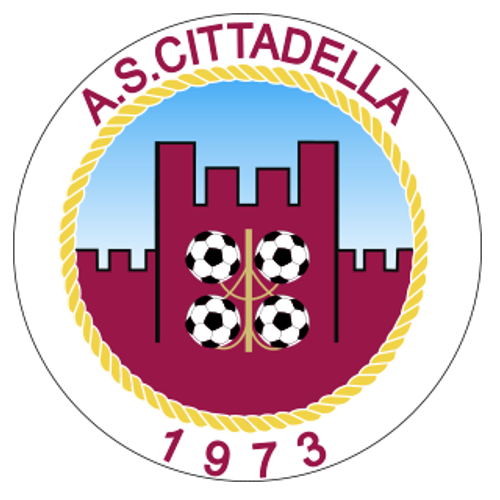 Cittadella was founded in 1973, after the merger of U.S. Cittadellense and A.S. Olympia. The club spent most of its first years in amateur football, and then professional football at Serie C2 and Serie C1 ranks. Cittadella won its first promotion to Serie B in 1999 after defeating Brescello in the playoff finals, and spent a total two seasons in the Italian second-highest ranked division, being then relegated in 2001–02 Serie B. During their first stay in Serie B, the club played in Stadio Euganeo in Padua and, in an attempt to expand the fanbase, was renamed A.S. Cittadella Padova, being Padua (Padova in Italian) the capital city of Cittadella's referring province.

Cittadella returned to Serie B in 2008, after defeating Cremonese in the 2007–08 Serie C1/A playoffs, under the guide of head coach Claudio Foscarini. In the 2008–09 Serie B season, the club was involved to projects focused to boost the capacity of the Stadio Tombolato to 7,500, in order to let the club play in their home town (with dispensation from the FIGC, since a stadium of at least 10,000 seats is required for Serie B). Thus, Cittadella played the first season games in Stadio Omobono Tenni in Treviso, about 40 km away. After some delays, the first Serie B game played in Cittadella was played on 29 October 2008, Ancona being the opponents. The club escaped relegation in the final days of the season, thus ensuring another year of Serie B football to the local fans.

The following season, Cittadella thrashed Lecce 5–1 and Mantova 6–0 to finish 6th, and only losing to Brescia in the playoffs due to Brescia's superior league placing, despite a late 1–0 win in the second leg.

The club produced two strikers who later left for Serie A teams, namely, Riccardo Meggiorini (50% rights sold for €2.5M), Matteo Ardemagni (sold for €3.75M). Moreover, 2010–11 Serie B topscorer Federico Piovaccari also left for Sampdoria in 2011 for €3.5M which Samp relegated from Serie A in 2011.

Stadio Pier Cesare Tombolato is a multi-use stadium in Cittadella, Italy. It is currently used mostly for football matches and is the home ground of A.S. Cittadella. The stadium holds 7,623.

For the 2008-09 season, there're projects to boost the capacity of the stadium to 7,500, in order to let A.S. Cittadella play in their home town, though it will need a dispensation from the FIGC, that requires a stadium of at least 10,000 seats for Serie B. The end of the expansion is scheduled for the end of October 2008 and in the meanwhile Cittadella will play in Stadio Omobono Tenni in Treviso, about 40km away. The first game in the renovated stadium has been against A.C. Ancona on October 29.