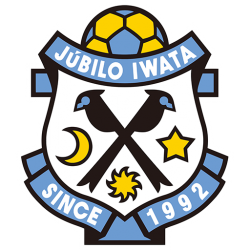 Júbilo Iwata (Japanese: ジュビロ磐田, Hepburn: Jubiro Iwata) is a professional Japanese association football team that currently play in the J2 League. The team name Júbilo means 'joy' in Spanish and Portuguese. The team's hometown is Iwata, Shizuoka prefecture and they play at Yamaha Stadium. For big fixtures such as the Shizuoka Derby with Shimizu S-Pulse and against some of the top teams in J1, Júbilo play at the much larger Ecopa Stadium in Fukuroi City, a venue built specifically for the 2002 FIFA World Cup finals. They practice at Okubo Ground in Iwata and Iwata Sports Park Yumeria.

Yamaha Stadium (ヤマハスタジアム, Yamaha Sutajiamu) is a football stadium located in Iwata City, Shizuoka Prefecture, Japan, owned by Yamaha Motors, next to whose plant it is located, and was purpose-designed for use with soccer or rugby.

It is the home ground for the J1 League club Júbilo Iwata, and the rugby union team Yamaha Jubilo. The stadium has a seating capacity of 15,165 people.