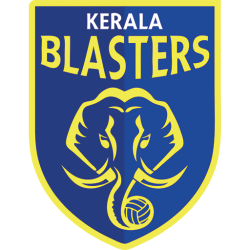 Kerala Blasters Football Club is an Indian professional football club based in Kochi, Kerala. The Blasters are one of the ten teams to have been part of the Indian Super League (ISL), the top tier of Indian football since its inception. They play in the league under licence from All India Football Federation (AIFF). The club was established on 24 May 2014 and began their first professional season a few months later in October 2014.

They play their home matches at the Jawaharlal Nehru Stadium at Kochi. The team has held the record for highest league attendance every season, regularly averaging over 55,000 fans a game.

The Blasters played their inaugural match on 13 October 2014, losing 1–0 to NorthEast United. The club made it to the final of the Indian Super League in its inaugural season(2014), where they lost 1–0 to Atlético de Kolkata after an extra time goal from Mohammed Rafique. They did not qualify for the finals the next season, but reached the final again in 2016. The team was again defeated by Atlético de Kolkata, this time through penalties 4–3.

Jawaharlal Nehru International Stadium, locally known as Kaloor Stadium is a multi-purpose international stadium situated in Kochi, Kerala. It is the home stadium of Indian Super League club, Kerala Blasters F.C. The stadium has a capacity of 60500. For Indian Super League matches it is limited to 41000. The building of a world-class international sports stadium in Kerala was sanctioned by the government of the late Chief minister of Kerala, K. Karunakaran. The stadium was completed ahead of schedule in 1996 by the Greater Cochin Development Authority (GCDA) led by V. Joseph Thomas IPS. The stadium is widely touted to be one of the noisiest football stadiums in the world due to its distinctive architecture.