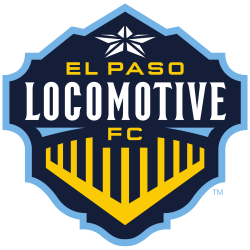 El Paso Locomotive FC is an American professional soccer team based in El Paso, Texas. Founded in 2018, the team made its debut in the USL Championship in 2019.

Club crest and colors
The Locomotive brand was unveiled on October 4, 2018, beating out finalists Lagartos, Estrellas, Stars, and Tejanos. The crest is shaped in a manner similar to Mission Style buildings and features three main colors: West Texas Sky blue, Desert Dusk blue, and High Noon Sun. The crest has 11 vertical stripes that represent the eleven players on the field and resemble the front of a locomotive. A city icon, The Star on The Mountain, adorns the top of the crest, which is shaped in the silhouette of the Franklin Mountains.

Southwest University Park is a baseball stadium in El Paso, Texas. Primarily used for Minor League Baseball, it is the home of the El Paso Chihuahuas of the Triple-A Pacific Coast League. Opened in 2014, the facility has an official capacity of 9,500, with 7,500 fixed seats with the rest being berm and party deck standing room sections.

The name "Southwest University" is applied as a corporate sponsor, and not as the home stadium of the University (which has no intercollegiate athletics program; the university is a for-profit virtual college). Southwest University Park was named as the best new ball park in 2014 by Ballpark Digest. The elevation of the playing field is approximately 3,750 feet (1,140 m) above sea level.