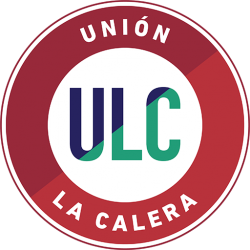 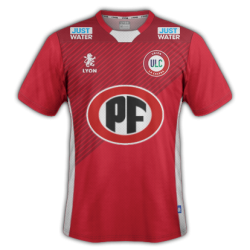 Unión La Calera is a Chilean football club based in La Calera and competes the Primera División de Chile.

After spending six seasons in second level, the club obtained its first promotion to Primera División de Chile in 1961, category where they remained until 1974. In 1985, they returned to top-tier, but they were relegated the incoming season. From there, they wandered through second level and third level, until returning to the top category in 2011, and in 2018, after a brief stint in the promotion division (Primera B). In its palmares, Unión La Calera counts with three second division titles (the 1961 and 1984 Segunda División de Chile titles; and a 2017 Primera B title) and two Tercera División de Chile honors (1990 and 2000).

The color that identifies the club is red (present in their uniform since the formation as Union La Calera) and disputes their home games at the Estadio Municipal Nicolás Chahuán Nazar. Nevertheless, due to its reconstruction, around 2017 and 2018 they moved to Estadio Municipal Lucio Fariña Fernández in neighboring Quillota (which has a capacity for 7703 spectators). Their main local rivals are San Luis de Quillota.

The club is well known for be the team when Sergio Jadue began his sports manager career before coming to power in the ANFP in 2011. He assumed Unión La Calera Corporation's presidency in 2007. In June 2009 he was appointed Club's President of the Board. During his management, Unión La Calera was promoted, after 26 years, to top-tier in 2010. After his departure, the team had a brief success in 2011's first part, reaching the Torneo Apertura's semi-final. In that tournament, highlighted players like Ramón Ignacio Fernández, Braian Rodríguez or Gonzalo Barriga.

Estadio Municipal Nicolás Chahuán is a multi-use stadium in La Calera, Valparaiso Region, Chile. It is currently used mostly for football matches, and is the home ground of Unión La Calera of the Chilean Primera División. The stadium was opened in 1950, but it was demolished and completely rebuilt in 2019, with a seating capacity of 9,200 spectators.