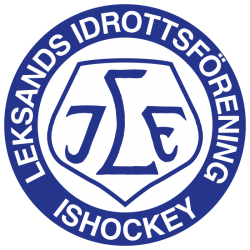 Leksands Idrottsförening is a Swedish ice hockey team from the town of Leksand in the region of Dalarna. The team plays in the top-tier league, SHL, after succeeding through the 2019 SHL qualifiers and thus earning promotion to the SHL. The club's home arena is Tegera Arena, which seats 7,650 spectators.

History
The club was formed on 13 August 1919, originally playing bandy and ski competitions. In 1920 they also took up football.

Following the relegation to HockeyAllsvenskan in April 2001, Leksand commuted between the top and second divisions until 2005–06, when the team was relegated to the second tier again, where they would find themselves until the 2012–13 season.


Leksand players celebrating a victory against arch rivals Mora IK in 2013.
For the 2007–08 season, Leksand signed former NHL goaltender Ed Belfour in an attempt to regain top league status. After winning the second league with relative ease, the team failed in the final qualification stage, Kvalserien, to gain promotion. Ed Belfour retired after the 2007–08 season.

Leksand once again won Allsvenskan in the 2008–09 season, but once again failed to qualify for the Elitserien in the 2009 Kvalserien. The managers Thomas Kempe and Thomas Jonsson were sacked following three straight defeats in the beginning of the Kvalserien. The team finished the 2009 Kvalserien with five wins in the last six games, but still failed to qualify. For the 2009–10 season, Leksand employed Leif Strömberg, who had previously successfully guided Södertälje SK through Kvalserien. The team once again won Allsvenskan and qualified for the 2010 Kvalserien, finishing three points ahead of AIK. In the ninth round of the 2010 Kvalserien, Leksand had a good chance to put them in the driver's seat for promotion to Elitserien, but Leksand failed to beat the Kvalserien's worst ranked team Växjö Lakers and, despite a win in the tenth and final round, Leksand missed Elitserien as both AIK and Rögle BK won their respective games in the final round.

After failing promotion, Leif Strömberg was replaced by ex-Leksand forward Niklas Eriksson, under whom the following season Leksand attempted to reach the Kvalserien for the seventh consecutive season. The team finished fourth in Allsvenskan and missed automatic qualification for the Kvalserien and had to play in a pre-qualification series to reach the Kvalserien, but Leksand finished third and missed the Kvalserien. Before the 2011/12 season, assistant head coach Christer Olsson took over the reins, but was sacked following a defeat at Sundsvall Hockey in late November and replaced by Andreas Appelgren.

After winning the regular season in the 2012–13 season, Leksand once again qualified for play in Kvalserien. In the 2013 Kvalserien, Leksand finally promoted back to the Swedish Hockey League (SHL; formerly Elitserien), the top-tier league, for the first time since the 2005–06 season.

Tegera Arena is an arena in Leksand, Sweden primarily used for ice hockey, and is the home arena of Leksands IF. It opened in October 2005 and holds 7,650 people.

History
The arena was host to the 2007 World Junior Ice Hockey Championships together with FM Mattsson Arena in Mora. The following season, the 2007 4 Nations Cup was played at Tegera Arena. The current attendance record for ice hockey is 8,017. However, the maximum capacity has since been reduced to 7,650 due to safety regulations. Until fall 2010 the name was Ejendals Arena, but the company owning the name rights decided they wanted to promote a brand instead of their company name.