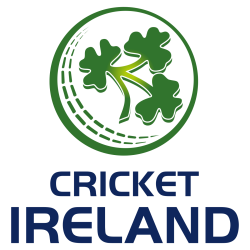 The Ireland cricket team represents all of Ireland in international cricket. The Irish Cricket Union, operating under the brand Cricket Ireland is the sport's governing body in Ireland, and organises the international team.

Ireland participate in all three major forms of the international game; Test, One-Day International (ODI) and Twenty20 International (T20I) matches. They are the 11th Full Member of the International Cricket Council (ICC), and the second Full Member from Europe, having been awarded Test status, along with Afghanistan, on 22 June 2017.

Cricket was introduced to Ireland in the 19th century, and the first match played by an Ireland team was in 1855. Ireland toured Canada and the United States in the late 19th century, and occasionally hosted matches against touring sides. Ireland's most significant international rivalry, with the Scotland national cricket team, was established when the teams first played each other in 1888. Ireland's maiden first-class match was played in 1902.

Ireland were elected to Associate membership of the ICC in 1993, but played their first full ODI in 2006 against England in the build-up to the 2007 ICC Cricket World Cup, their first successful qualification. At that tournament, a series of eye-catching results against Full Members, including a draw against Zimbabwe, and wins against Pakistan and Bangladesh confirmed Ireland's ODI status after the competition. Since then, they have gone on to play 150 ODIs, resulting in 64 victories, 75 defeats, 8 no results, and 3 ties. Contracts for players were introduced in 2009, marking the transition to becoming a professional team.

Prior to attaining Test status, Ireland also played first-class international cricket in the ICC Intercontinental Cup, which they have won four times between 2005 and 2013. Due to their successes in the first-class ICC Intercontinental Cup competition, and further high profile wins at the World Cups of 2011 (England) and 2015 (West Indies and Zimbabwe), they were labelled the "leading Associate" and stated their intention to become a full member by 2020. This intention was realised in June 2017, when the ICC unanimously decided to award Ireland and Afghanistan Full Member status, which allows them to participate in Test matches.