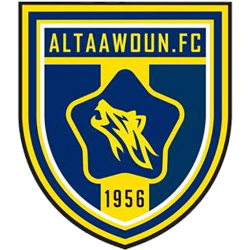 Al-Taawoun ("Cooperation" Arabic: التعاون‎), sometimes known as Al-Tawen, is a professional football club based in Buraidah, that plays in the Saudi Professional League, the top tier of Saudi Football.

Al-Taawoun have won the King Cup once, in 2019, defeating Al-Ittihad in the final. Their best ever top-flight season came in 2018–19 when the club successfully challenged for the Asian Champions League spots, eventually finishing in third place in the top division, their highest league position to date, as well as winning the King Cup. In 2017, the club became the first team from the Qasim region to play in the Asian Champions League. Al-Taawoun have been second-tier champions once and runners-up twice. The club holds the distinct achievement as being the one of the two second-tier teams to play in the final of the King Cup.

The club play their home games at King Abdullah Sport City Stadium in Buraidah, sharing the stadium with city rivals Al-Raed with whom they contest the Qasim Derby with.

The King Abdullah Sports City Stadium, previously known as the Prince Abdullah bin Abdul Aziz Stadium, is a football stadium in Buraidah, Saudi Arabia. It is used mainly for football and hosts the home matches of Al Taawon and Al-Raed of the Saudi Professional League. The stadium has a seating capacity of 25,000 spectators.