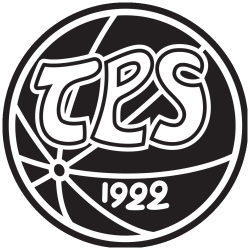 Turun Palloseura, commonly known as TPS, is a professional football club based in Turku, Finland. During the 2019 season, the men’s first team of the club competes in Ykkönen, the second highest tier of men’s football, and the women’s first team in Kansallinen Liiga, the highest level of women’s football in Finland. Nicknamed "Tepsi", the club was founded in 1922.

TPS have won 8 League titles and 3 Finnish Cups. They play their home league matches at Veritas Stadion, with a capacity of 9,372 seats for most matches.

Veritas Stadion is an association football stadium in Turku, Finland. It is situated in the district of Kupittaa, in an area dedicated to sporting venues. The stadium serves as the home venue for FC Inter Turku and Turun Palloseura playing in Finland's premier football league, the Veikkausliiga.

In Veritas Stadion there are two stands opposite to each other. The old Olympic stand (Olympiakatsomo) was built for the 1952 Summer Olympics and the new, modern main stand was ready in 2003. After that the name of the stadium was changed to Veritas Stadion, having formerly been known simply as the "Kupittaa football stadium" (Kupittaan jalkapallostadion). The old Kupittaa Stadium's record attendance was approximately 15,000 spectators for the 1987–88 UEFA Cup match between Turun Palloseura and Italian giants Inter Milan. The Veritas Stadion's attendance record of 9,089 spectators was set at the local derby between Turun Palloseura and Inter Turku in 2009.