Grimsby Town Football Club is a professional association football club based in the seaside town of Cleethorpes, North East Lincolnshire, England. The team compete in League Two, the fourth tier of league football in England. They were formed in 1878 as Grimsby Pelham and later became Grimsby Town. The club is located at Blundell Park where it has been since 1898.

Despite recent misfortune, including successive playoff failures, the club is the most successful of the three professional league clubs in historic Lincolnshire, being the only one to play top-flight football. It is also the only club of the three to reach an FA Cup semi-final (doing so on two occasions) and is the only one to succeed in two finals at the old Wembley Stadium. It has also spent more time in the English game's first and second tiers than any other club from Lincolnshire.

Notable managers include Bill Shankly, who went on to guide Liverpool to three League titles, two FA Cups and a UEFA Cup triumph and Lawrie McMenemy who, after securing promotion to the then third division in 1972, moved to Southampton where he won the FA Cup in 1976. Alan Buckley is the club's most successful manager; he had three spells as team manager between 1988 and 2008, guiding the club to three promotions and two appearances at Wembley Stadium during the 1997–98 season winning both the Football League Trophy and the Football League Second Division Play-Off Final. In 2008 Buckley took Grimsby to the capital again, but lost out to MK Dons in the final of the Football League Trophy. The Mariners had also reached the Football League Two Play-Off final in 2006 at Cardiff's Millennium Stadium, but lost the match 1–0 to Cheltenham Town, and in 2013 they returned to Wembley only to be defeated by Wrexham in the FA Trophy final. Relegation from The Football League in 2010 made them the fourth club to compete in all top five divisions of English football (after Carlisle United, Oxford United, and Luton Town); they returned to the league six years later. Blundell Park is a football ground in Cleethorpes, North East Lincolnshire, England and home to Grimsby Town Football Club. The stadium was built in 1899, but only one of the original stands remains. The current capacity of the ground is 9,052, after being made all-seater in summer 1995, reducing the number from around 27,000. Several relegations in previous years meant the expansion seating was also taken away; that reduced the capacity further from around 12,000 to what it is now.

The stadium is Grimsby Town's third ground, having previously played at Clee Park, Lovett Street and Abbey Park in the club's first twenty years of existence. The record attendance at Blundell Park was 31,651 in an FA Cup tie against Wolverhampton Wanderers on 20 February 1937. The two clubs also hold the record attendance at Manchester United's Old Trafford stadium when 76,962 people saw the two sides meet again in the 1939 FA Cup semi-final. 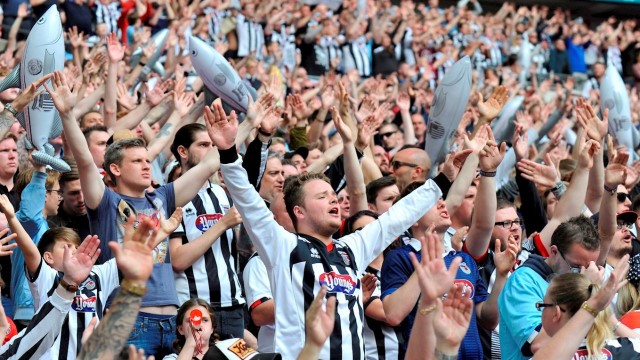 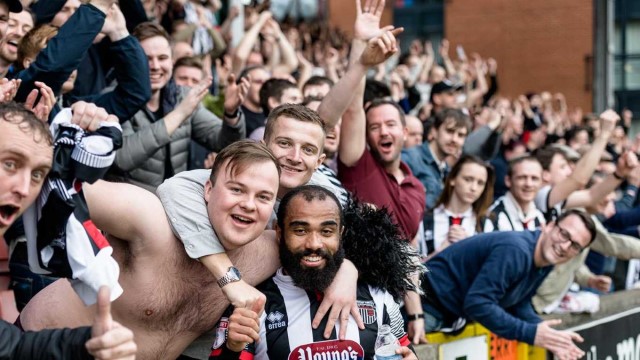