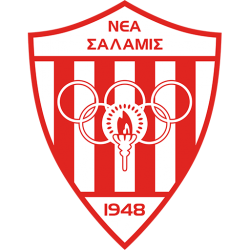 Nea Salamis Famagusta FC or Nea Salamina Famagusta FC (Greek: Νέα Σαλαμίνα Αμμοχώστου) is a professional football club based in Ammochostos (also known by its romanized name, Famagusta), Cyprus. It has been a refugee club since the 1974 Turkish invasion of Cyprus, when Turkey occupied the northern part of the island. The club is temporarily based in Larnaca.

Nea Salamina's most notable achievements were its victories in the Cypriot Cup and the Cypriot Super Cup in 1990. Its highest finish in the Cypriot First Division is third place. During its first five years (1948–1953), the team participated in the Cyprus Amateur Football Federation championships. In 1953 the club joined the Cyprus Football Association (CFA), participating regularly in association championships and cup competitions. It has played in more than 50 Cypriot First Division seasons, ranking seventh in that category.

The team participated for the first time in European competition in 1990 at the European Cup Winners' Cup, and played in the 1995, 1997 and 2000 UEFA Intertoto Cups. The team is part of the Nea Salamina Famagusta sports club, which was founded in 1948; the parent club also fields a men's volleyball team. The club is named after the ancient city of Cyprus, Salamis or Salamina, which is located nearby modern Famagusta ("Nea" means "new" in Greek language).

Ammochostos Stadium (Greek: Γήπεδο 'Αμμόχωστος') is a multi-purpose stadium in Larnaca, Cyprus. It is currently used mostly for football matches and is the temporary home ground of the refugee team from the occupied city of Famagusta, Nea Salamis Famagusta.