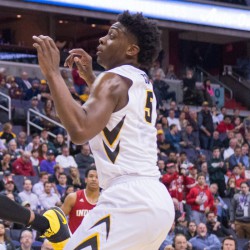 Tyler Cook (born September 23, 1997) is an American professional basketball player who last played for the Chicago Bulls of the National Basketball Association (NBA), on a two-way contract with the Windy City Bulls of the NBA G League. He played college basketball for the Iowa Hawkeyes.

Early life and high school career
Cook has an older brother. Cook played for Chaminade College Preparatory School alongside Jayson Tatum. As a senior, the duo led the team to a state title, where Cook scored 17 points in the championship game. In 2015, Cook announced his intentions to attend the University of Iowa.

College career
He entered the starting lineup straight away during his freshman season but fractured his right index finger in November and missed seven games. He averaged 12.3 points and 5.3 rebounds per game on a team that reached the NIT. During his sophomore season he averaged 15.3 points and 6.8 rebounds per game. In March 2018, Cook submitted paperwork for early entry into the 2018 NBA draft, but did not hire an agent.

Cook scored 26 points as the Hawkeyes defeated Connecticut to win the 2K Classic tournament. He had another 26 as Iowa beat their rivals Iowa State. Cook missed a game against Northwestern on January 9, 2019 with a knee injury, though the team won without him. As a junior, Cook led Iowa to the NCAA tournament and averaged 14.5 points and 7.6 rebounds per game. Cook declared for the NBA draft and hired a agent.

Canton Charge (2020)
Cook's contract was not renewed when the second 10-day deal expired. He rejoined the Charge.

Iowa Wolves (2021)
On November 30, 2020, the Minnesota Timberwolves announced that they had signed Cook, but on December 19, 2020, the Timberwolves waived Cook. On January 8, 2021, the Iowa Wolves announced that they had acquired the returning right to Cook and the 17th overall pick in the first 2021 NBA G League draft from the Oklahoma City Blue for the returning right to James Webb III and the 7th overall pick in the 2021 draft.

Chicago Bulls (2021–present)
On September 8, 2021, Cook signed with the Chicago Bulls and on October 18, they converted his deal into a two-way contract with the Windy City Bulls of the NBA G League.