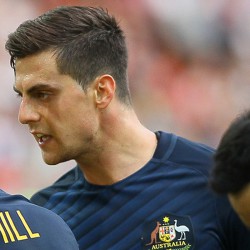 Western Sydney Wanderers
On 20 May 2013 Juric signed for Western Sydney Wanderers on a two-year deal, becoming the Wanderers first signing of the A-League off-season. On debut for the Wanderers he scored the equaliser against the Central Coast Mariners in the 1–1 draw on 12 October 2013. Juric scored his first Asian Champions League goal in the Round of 16 against Sanfrecce Hiroshima on 7 May 2014. In a successful first season at Western Sydney, Juric finished with 12 goals in 29 appearances, four of those coming in the 2014 Asian Champions League which his side won, Juric scoring, an amazing goal, the only goal in a 1–0 aggregate win over the Arabian team Al-Hilal.

On 15 January 2015, Juric turned his back on a proposed $10 million move to Chinese Super League side Shanghai Shenhua, opting to chase a move to Europe, where he believed he would have a better chance of staying involved with the Socceroos beyond the 2015 AFC Asian Cup. Juric was released by the Wanderers on 16 May 2015.

Roda JC
On 15 August 2015, Juric signed a one-year deal with Eredivisie side Roda JC. He made his Eredivisie debut for Roda JC on 20 September 2015 at the Parkstad Limburg Stadion in Kerkrade against Feyenoord as a 71st-minute substitute for Edwin Gyasi. He was released at the end of the 2015–16 season.

FC Luzern
On 2 July 2016, despite interest from the Chinese Super League, Juric joined FC Luzern. On his first appearance for Luzern, Juric manage to score a brace. After scoring four goals in seventeen appearances for Luzern, English club Reading FC who were impressed with his ability to hold up play and trouble defences, were reportedly interested in his services. Despite intense interest from England, Juric further endeared himself to the Luzern faithful and stayed. Though injury troubles slowed him down, Juric finished the 2016–17 Swiss Super League season, with 8 goals in 30 appearances.

Despite a second injury hit season in the 2017–18 Swiss Super League, Juric was once again Luzern's second highest goalscorer with seven goals in 27 appearances.

CSKA Sofia
After his contract with Luzern expired, Juric joined Bulgarian club CSKA Sofia, signing a contract on 27 August 2019. He scored his only goal for the team on 12 September 2020, netting a late equalizer in the 1:1 away draw with Cherno More in a league match. His tenure at the club lasted for a little over a year, as he failed to get many opportunities to reveal his skills, in part due to injury problems. In June 2020, Juric tested positive for COVID-19. On 18 November 2020 the club confirmed that Juric had been released by mutual consent.

International career
On 28 June 2013, Juric was called up to the Socceroos training camp on the Central Coast. Juric made his debut for the Socceroos off the bench in the Socceroos' 2013 EAFF East Asian Cup match against South Korea.

Juric was chosen by Ange Postecoglou, the Australian manager, to take part in the 2015 AFC Asian Cup and on 13 January 2015, Juric scored his first Asian Cup goal against Oman, coming of the bench as a substitute for Tim Cahill. He set up the winning goal in the final in extra time for Australia, holding off Korean defenders and pulling off a nutmeg to put a cross through to James Troisi.

In May 2018 he was named in Australia's 23-man squad for the 2018 World Cup in Russia. He replaced Andrew Nabbout in the match against Denmark in the 64th minute after Nabbout dislocated his shoulder, and started against Peru; however, he was unable to score in both games as Australia were eliminated from the tournament in the group stage, and was himself substituted for Tim Cahill in the match against Peru.