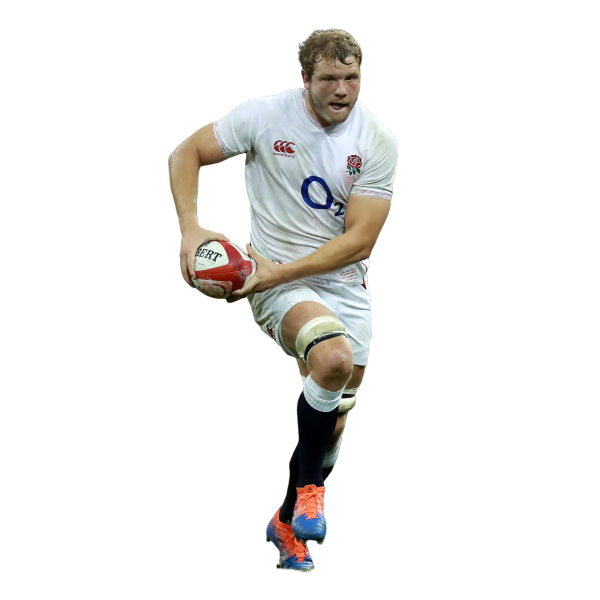 Joseph Oliver Launchbury (born 12 April 1991) is an English rugby union lock who plays for Premiership side Wasps. He represents England at international level and previously played for the under-18s and under-20s before making his Test debut in 2012. Launchbury plays mainly in the second row but is also comfortable as a blindside flanker. His nickname in the England set up is "Launchers".

Born in Exeter, Launchbury was educated at Christ's Hospital in West Sussex where he captained the school rugby team. He played for Horsham and also represented Barns Green before joining the Harlequins Academy age 15. After Harlequins failed to offer him a professional contract aged 18, he left the club and joined then National League 2 South side Worthing for the 2009–10 season. His performances at Worthing under Will Green, then head coach and former Wasps player, saw him recommendeded to his former club once again. He played in several A League matches for Wasps and, after a spell training with the Eastern Province Kings in South Africa, did enough to be given a full-time contract from July 2010.

He was named in Wasps' Academy squad for the 2010–11 season and also joined National League 1 side Rosslyn Park on loan to gain senior experience. Having played the first half of the season for the A team and out on loan, Launchbury made his Wasps' debut on 30 January 2011 in the Anglo-Welsh Cup against Harlequins as a replacement, scoring a try in a 38–13 defeat. His first Premiership appearance came the following month against Leicester Tigers and he remained a fixture in the side for the rest of the season. In May 2011 he was named the club's Young Player and Academy Player of the Season and was rewarded with a new three-year contract.

In 2011–12, his first full season with Wasps, Launchbury made 15 senior team appearances despite missing four months of the season after injuring his ankle in October. He returned to the side in February as a replacement but went into the starting XV for the next game and was ever-present as Wasps retained their Premiership status. All but one of his appearances over the season were made as a blindside flanker despite playing in the second row for most of the previous year.

He graduated from the Academy at the end of the season, moving up to the senior squad alongside several other England youth internationals.

Ahead of the 2016/17 Aviva premiership campaign Launchbury was named captain of Wasps.