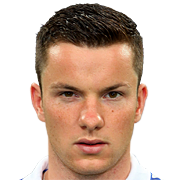 Alexander Baumjohann (born 23 January 1987) is a German footballer who plays for Western Sydney Wanderers as an attacking midfielder. After developing as a star junior with Schalke 04, he moved to Borussia Mönchengladbach and enjoyed great success with the Bundesliga club, earning a move to Bayern Munich in 2009.

A return to Schalke 04 soon followed, where he developed a reputation as an excellent provider, a reputation he further enhanced in spells with 1. FC Kaiserslautern and Hertha BSC. As of May 2018, he had amassed 46 career assists.

Germany
Baumjohann began his youth career in 1991 with Teutonia Waltrop and in summer 2000, joined Schalke 04. After only two appearances in the first team he was signed by to Mönchengladbach in January 2007 on the promise of greater first team exposure. On 27 January 2007 he made his debut with Mönchengladbach against Energie Cottbus.

In July 2009, he moved to Bayern Munich on the recommendation of Jupp Heynckes, who personally scouted the player. Six months before the move, Heynckes foreshadowed a deal, saying that "Talent makes Alex a 'Bayern player', even tough he has yet to make the breakthrough in the Bundesliga." However, after six months with Bayern and sporadic Bundesliga game time, he rejoined FC Schalke.

On 21 August 2012, Baumjohann joined 2. Bundesliga club Kaiserslautern on a one-year contract. In Baumjohann's 27th game for the club, he netted his sixth goal, scoring with a free-kick in a playoff vs. Hoffenheim for a place in the Bundesliga.

On 8 June 2013, it was announced that Baumjohann would leave Kaiserslautern, who lost to Hoffenheim in their Bundesliga play-off over two legs, for newly promoted Hertha BSC, signing a three-year contract with the capital club. On 18 March 2016, he extended his contract until 2017.

Brazil
After the 2016–17 season, Baumjohann considered playing in Brazil, the country of his wife. In July 2017, he signed with Coritiba. Having limited playing time at Coritiba due to a broken hand, Baumjohann left the club after its relegation, although wanting to renew his contract. In 2018, he joined Vitória.

Australia
On 9 August 2018, Baumjohann was brought to the A-League by coach Markus Babbel, signing with Western Sydney Wanderers.