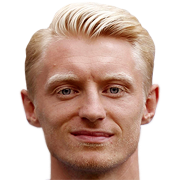 Andreas Beck (born 13 March 1987) is a Soviet-born German professional footballer who plays as a right back for German club VfB Stuttgart in the Bundesliga.

Early life
Beck was born in Kemerovo, USSR (now Russia). When he was three, his family emigrated to Germany. "I will never forget that we lived in a caravan at first."

Club career
VfB Stuttgart
Beck started his football career at DJK-SG Wasseralfingen and SVH Köningsbronn before the age of 14. He then transferred to VfB Stuttgart and in 2005, Beck signed a professional contract with the club. The following year, Beck made his Bundesliga debut for Stuttgart on 11 February 2006 against Arminia Bielefeld. Five days later he experienced his European debut with a substitute appearance in the intermediate round of the UEFA cup against the Middlesbrough. The following week saw Beck signing a contract extension, keeping him until 2010.

Following Andreas Hinkel's departure to Sevilla, Beck was promoted to the first team and was expected to replace Hinkel as a right-back. However, Beck failed to do so, with Ricardo Osorio establishing himself in the team, playing as a right-back throughout the 2006–07 season. At the end of the 2006–07 season, Beck had made four appearance for the club, as they won the Bundesliga for the first time since 1992.

In the 2007–08 season, Beck started the season being on the bench until he made his first appearance on matchday 10 coming on as a substitute for Yıldıray Baştürk in the 86th minute, in a 4–1 loss against Hamburg on 20 October 2007. Beck scored his first goal for Stuttgart in the next appearance on 27 October 2007 against Bayer Leverkusen which resulted in a 1–0 win for Stuttgart. Beck then played a vital role when he provided assists in two of the Champions League matches against Lyon and Rangers. But during a match against Rangers, Beck suffered a knee ligament injury and was sidelined for months. Shortly after, Beck was linked with a move away from the club after considering his future away from the club. However, Beck announced his intention to stay at the club Two months later on 3 February 2008, Beck made his first team return in a 4–0 loss against Schalke 04. In his second season at Stuttgart, Beck made eighteen appearances for the club.

Hoffenheim
After failing to secure a place in the starting eleven for Stuttgart, Beck decided to leave the club to look for a new challenge. 1899 Hoffenheim made a bid for Beck, which was rejected. Ralf Rangnick was keen to sign Beck and eventually he moved to Hoffenheim for a transfer fee about €3 million on a four-year-deal in July 2008.

Beck made his debut for Hoffenheim in a DFB-Pokal match as they won 1–0 against Chemnitz on 10 August 2008. Beck made his league debut for Hoffenheim, playing as a right-back, in a 3–0 win against Energie Cottbus on 16 August 2008. After joining, Beck later established himself as a key member of the side and got more playing time than at Stuttgart. After missing three matches due to a gastrointestinal virus, Beck made his return to the first team in the last game of the season, in a 3–2 win over Schalke 04. In his first season, Beck made 30 league appearances and had two assists. Only Tobias Weis and Demba Ba were on more missions over the course of the season.

In the 2009–10 season, Beck continued to remain as right-back in the first team. Beck suffered a hamstring injury that kept him out for six weeks. Beck made his first team return, playing as a right-back, in a 2–0 loss against Bayern Munich on 15 January 2010. Once again, Beck suffered a knee injury, which kept him out for aboutfive weeks. Beck made his first team return, coming on as a substitute for Christian Eichner in 72nd minute, in a 0–0 draw against Nürnberg on 20 March 2010. In his second season at the club, Beck made twenty-five appearances for the club.

In the 2010–11 season, Beck was announced as new captain for the club, succeeding former captain Per Nilsson, who left for Nürnberg. Upon learning this, Beck quoted: "I'm happy about having been given this responsibility. But my priority remains to work for the success of the club and nothing else."|Beck on being a captain." Beck also stated being captain is big responsibility on and off the pitch. He played his first match as captain on 14 August 2010 as the club won 4–0 in the DFB-Pokal first round encounter against Hansa Rostock. Beck also captained his first league match seven days later, in a 4–1 win over Werder Bremen in the opening game of the season. Beck was almost ever present in the 2010–11 season, making thirty-three appearances, having missed only one game due to suspension after being booked five times during the season. In May 2011, Hoffenheim 1899 claimed Juventus made an approach for Beck as the Italian side held a long-term interest in Beck. But Juventus' interests in Beck were put back on hold after Luigi Del Neri was sacked at Juventus. Hoffenheim accepted a bid for Beck from Juventus but however the move was put off by Hoffenheim's evaluation of the 24-year-old. Afterwards, Juventus were not interested in signing Beck and he was expected to play next season.

In the 2011–12 season, Beck continued to be in first team and retained his captaincy. On 14 October 2011, Beck extended his deal with Hoffenheim by a further two years to 2014. In November 2011, Beck made only one appearance due to a yellow card suspension and suffering a calf injury. Beck scored his first goal for the club in a 3–2 loss against Nürnberg on 28 April 2012. Beck made 31 appearances and scored once in the 2011–12 season.

Ahead of the 2012–13 season, Beck announced his intention to voluntarily resign as captain and the newly signed Tim Wiese succeeded him as captain. After not being included in a squad against Frankfurt on 1 September 2012, Beck made his first team return on 23 September 2012, in a 3–1 win over Hannover 96. However, following Wiese's injury, Beck was captain for the match against Nürnberg on 28 November 2012, which they lost 4–2. In the wake of Markus Babbel's sacking, Beck criticised Babbel after disagreements. After Wiese was stripped of the captaincy, Beck was permanently given the captaincy. Beck scored his first goal of the season in a 2–2 draw against Wolfsburg on 13 April 2013. Beck made 31 appearances and scored once in the 2012–13 season in which he helped the club survive relegation.

In the 2013–14 season, Beck continued to make an impressive display in the pre-season friendly matches, so Beck remained captain for another season under the new management of Markus Gisdol. Beck then scored his first goal of the season, in a 3–0 win over Hamburg on 1 February 2014. During a match against Mainz 05 on 15 March 2014, which Hoffenheim lost 4–2, Beck unintentionally knocked the cameraman, causing him to become unconscious and resulting him to go on hospital. With his contract expiring in the summer, Beck was linked a move away from Hoffenheim, prompting the club's management to issue an ultimatum to sign a new contract until April. Eventually, Beck signed a contract with the club, keeping him until 2017. Beck was almost ever present in the 2013–14 season, making thirty-three appearances.

International
Beck was eligible for Germany and Russia.

On 21 February 2007, he played his first game for the U21 Squad against Italy, having previously played three games for the U19 and U18 of the DFB. Beck then scored his first Germany U21 goal in a friendly match, in a 2–2 draw against Republic of Ireland U21 on 21 August 2007.

His largest international success was the win of the UEFA European Under-21 Championships 2009 in Sweden under manager Horst Hrubesch. He scored the only goal against Italy U21 to send Germany to the final. He played the full 90 minutes against England U21 in the final and helped the team to keep a clean sheet in the 4–0 win.

Beck was included on the 30-man preliminary roster for the 2010 FIFA World Cup, but did not make it to the final 23 man squad by Joachim Löw as he favoured Dennis Aogo and Holger Badstuber. He scored two goals against an Eppan U20 XI team in a warm-up game as a part of the preparations for the upcoming tournament. However these goals were not scored in a full international game so they are not counted as international caps or goals.

After being left out of the squad, Beck believed his exclusion from the squad would help accelerate his development as a person and a footballer.