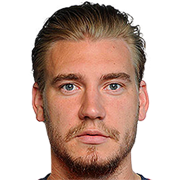 Nicklas Bendtner (born 16 January 1988) is a Danish professional footballer who plays as a forward. His preferred position is centre-forward, but he has also played on the right side of attack, and occasionally on the left. A large, tall, and physically strong player, he is known for his ability in the air and possesses a powerful header.

Having progressed through the youth ranks at Tårnby Boldklub, Kjøbenhavns Boldklub and Arsenal, Bendtner signed his first professional contract with Arsenal in 2005. He made his debut in October 2005 in the League Cup against Sunderland. For the 2006–07 season, Bendtner was loaned out to Championship club Birmingham City, where he made 48 appearances. Following his return to Arsenal, he became a regular first team player, but began to slip out of favour during the 2010–11 season. As a result, he moved on loan to Premier League club Sunderland for the majority of the 2011–12 season, where he made 30 appearances. He then spent the entire 2012–13 season on loan to Serie A club Juventus, where he made 10 appearances but failed to score. Bendtner was released by Arsenal in 2014. He subsequently joined VfL Wolfsburg on a free transfer, for whom he scored the winning goal in the 2015 DFL-Supercup. Released in 2016, he returned to England where he spent the first half of the 2016–17 season with Nottingham Forest of the Championship, and in March 2017 he signed for Rosenborg.

Bendtner has played internationally for Denmark at under-16, under-17, under-19, under-21 and senior levels. He made his senior international debut as an 18-year-old, on 16 August 2006 in a friendly match against Poland, and scored his first international goal in that match. Bendtner was a member of Denmark's 2010 FIFA World Cup and UEFA Euro 2012 squads, and helped them qualify for the 2018 World Cup.