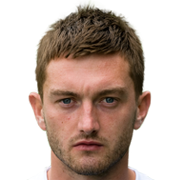 Lee Craig Frecklington (born 8 September 1985) is a professional footballer who plays as a midfielder for League Two club Lincoln City.

He has previously played for Lincoln City, Lincoln United, Stamford and Peterborough United. Although born and raised in Lincoln, Lincolnshire, Frecklington played for the Republic of Ireland B team in 2006.

Club career
Lincoln City
Born in Lincoln, Lincolnshire, Frecklington made his way through Lincoln City's Centre of Excellence. He was rewarded with a scholarship place in the summer of 2002, where he was guided by former Lincoln Head Coach John Schofield. Frecklington's ability has long been noted and during his schooldays he undertook trials with both Norwich City and Leeds United.

He made rapid progress in Lincoln's youth set-up and in the 2003–04 season, the second year of his scholarship, moved towards the first team first impressing against Manchester City in a friendly game and then making his debut in the Football League Trophy against Telford United in October 2003. To further his development he joined Lincoln United on work experience in January 2004. His debut for United, against Workington on 17 January, was memorable as it was abandoned due to injury to the referee.

He continued his progression in the final season of his scholarship, making his Football League debut as a substitute in the game at Rochdale on 12 February 2005 and it was no surprise that he was handed a one-year professional contract by then manager Keith Alexander.

In his first season as a professional, Frecklington did not initially make the first team squad and in September 2005 he was loaned to Stamford in the Southern League Division One East to gain further experience, remaining until Lincoln recalled him in December 2005. While at Stamford he played alongside his uncle David Frecklington who had been an apprentice at Lincoln City in the mid-1990s. Upon his return to Sincil Bank he became a regular presence on the substitutes bench and on 4 February 2006 stepped off the bench to score his first league goal in the game at Stockport. His reward was his first league start the following week at home to Torquay United. Always impressing, he made 18 league appearances in the second half of the season though only three of these were starts.

In the 2006–07 season, however, he featured heavily in a very pivotal role towards Lincoln's unsuccessful push for promotion to League One, already boasting a number of exceptional performances. Frecklington was named in the PFA League Two Team of the Year for the 2006–07 season.

Rotherham United
On 2 January 2013 following a successful loan spell, Frecklington signed for Rotherham United for an undisclosed fee on a two and half-year contract. Millers boss Steve Evans said "The competition to sign him has been fierce, but... Lee made it clear that his first choice was Rotherham." He helped Rotherham to second place in League Two which meant promotion in his first season at Rotherham, his personal highlight was scoring 'the millers' last goal of the season in added time to send Rotherham up, relegating Aldershot Town in the process. On the first day of the 2013-14 Football League One season Frecklington scored a brace as Rotherham came from 3-1 down to draw 3-3 against Crewe, then 3 days later he scored the winner against local rivals Sheffield Wednesday in a 2-1 victory in the League Cup. Frecklington's next goal came in a 3-2 home win against Oldham Athletic. Lee finished the season with 13 goals with 10 coming in the league. He scored in second leg of Rotherham's 4-2 aggregate victory over Preston in the playoff semi-final and despite him missing a penalty Rotherham won the 2014 League One Playoff Final against Leyton Orient on penalties to seal back to back promotions to the Football League Championship.

On 3 September 2015, Rotherham confirmed that Frecklington had been appointed new club captain, replacing former Millers skipper Greg Halford. Lee played a big part in helping Rotherham to two consecutive 21st-place finishes, hence surviving relegation twice but only played 22 games of the 2016-17 Championship due to injury as Rotherham finished last and were relegated back to Football League One.

International career
In November 2006, he was named in the Republic of Ireland B international squad for a friendly tie with Scotland. He qualified to play for Ireland due to fact that his maternal grandparents were born there.