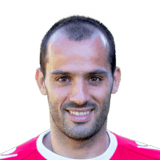 Rúben Micael Freitas da Ressureição (born 19 August 1986), known as Micael, is a Portuguese professional footballer who plays for S.C. Braga as a midfielder.

Club career
Early years / Nacional
Born in Câmara de Lobos, Madeira, Micael started his career with local C.F. União, making his professional debuts at the age of 17. For the 2008–09 season, he moved across the island to sign with top flight club C.D. Nacional.

In that first campaign, in which Nacional qualified for the UEFA Europa League, Micael, almost never an undisputed starter, featured heavily, scoring notably in a 3–1 home win over S.L. Benfica on 2 May 2009. The previous month he played for Portugal B, in a 2–0 win against Romania.

Micael started 2009–10 established in the starting XI, notably netting twice against FC Zenit St. Petersburg in the Europa League's last qualifying round (once in the 4–3 home triumph, adding a last-minute effort in Russia for the 1–1 and the aggregate win).

Porto
In mid-January 2010 F.C. Porto hired Micael for €3 million and four 1/2 years, acquiring 60% of the player's rights and setting a release clause of €30 million. His first league game for his new club was on the 30th, and he started in the place of suspended Raul Meireles in a 4–0 away success against his former team.

Micael was sparingly used by new Porto manager André Villas-Boas in the 2010–11 national championship, but he still appeared in 36 official matches and totalled 871 minutes of action (four goals, three in the Europa League campaign) as the team won the treble.

Atlético Madrid
On 18 August 2011, Micael and Porto teammate Radamel Falcao were purchased by Atlético Madrid in Spain, for €45 million – the former for €5 million, although Porto later confirmed that he didn't generate any revenue. The midfielder was immediately loaned to fellow La Liga side Real Zaragoza.

Micael was loaned to S.C. Braga for 2012–13, and he started the season in impressive fashion: in two games separated by only three days in late August he scored three goals, starting with a brace in a 3–1 home win against S.C. Beira-Mar then netting the 1–1 equalizer at Udinese Calcio for the UEFA Champions League's last qualifying round; in the latter match, he rounded up his performance by converting the decisive penalty in the shootout to help his team reach the group stage for the second time in its history.

Micael continued his strong displays in the Champions League group stage, scoring the first goal in an eventual 2–0 away success over Galatasaray SK in the second round.